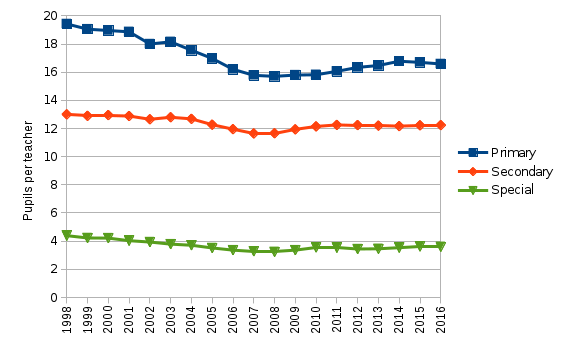 The number of pupils in Scotland divided by the number of teachers is shown for the three types of schools funded by the public sector.

In general, it is considered desirable for the pupil to teacher ratio to be as low as possible as it allows for smaller class sizes in which a teacher's attention is focused on fewer children. This ratio decreased to reach a minimum in 2007 and 2008 for all types of schools, but it has since increased. For primary schools this is in part caused by a rise in number of pupils since 2010, though this is not true for secondary schools which have continued their long term decline in pupil numbers. This will of course change in the next few years as the rise in primary pupil numbers feeds through to secondaries. The change in the number of children can be seen in Scotland's population statistics.

Between 1998 and 2016, the number of primary schools decreased from 2291 to 2013 (11%), secondary schools from 392 to 359 (10%) and special schools from 185 to 141 (24%). The reduction in schools is partly justified by falling pupil numbers, but also because the consolidation of two or more schools into a single large school can offer advantages in specialised staff and equipment. This argument is most relevant to secondary and special schools, but much less so for primary schools where travel time to the school is more important and the school also provides a hub for local communities.

This graph is constructed from data published by the Scottish Government on Historic School, Teacher and Pupil Numbers.