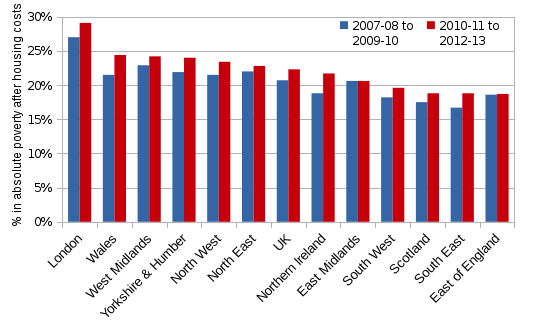 A household is classed as being in absolute poverty if its income, with taxes deducted, and benefits added, is below 60% of the median for a given recent reference year (2010-11 being such a year). All houses in the first income decile (see the inequality page for an explanation of deciles and the median) and most of those in the second will be in absolute poverty. Housing costs are deducted from household income in this data-set.

London has by far the highest rates of absolute poverty due to its very high housing costs. Scotland’s poverty rate is amongst the lowest in the UK, comparable to that of the South East and East of England regions.

Scotland, in common with most of the UK, saw a few percentage points rise in absolute poverty across the 2008-09 recession.

These data are sourced from the IFS publication Living Standards, Poverty and Inequality in the UK 2014.