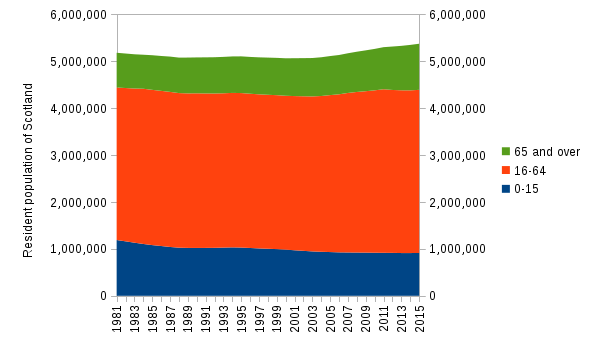 Scotland’s population had been in long term decline until immigration from newly admitted EU states reversed the trend in the mid 2000s. Since 2000, the population has grown at an average annual rate of about 0.4%. The UK’s growth rate for this time was 0.7%.

Those aged 65 and over have increased in number by 33% between 1981 and 2015. This is not simply due to increased life expectancy but is mainly explained by the so-called post-war baby boomers entering this age group. The decline in numbers of children has slowed in recent years and 2015 saw its first increase in many decades. This is possibly related to the recent increase in immigration. Overall though, the number of under 16s has decreased by 23% between 1981 and 2015.

It seems likely that future years will continue to see a rising elderly population and that will place a greater demand on the NHS and social care. Also a rise in the number of children will need to be factored into planning for schools.

The birth rate spikes following both world wars and their implications for our current age distribution can be appreciated in this animation.

References
The first graph was published in A Nation Changed? The SNP and Scotland ten years on. A book with contributions from various authors edited by Gerry Hassan and Simon Barrow.