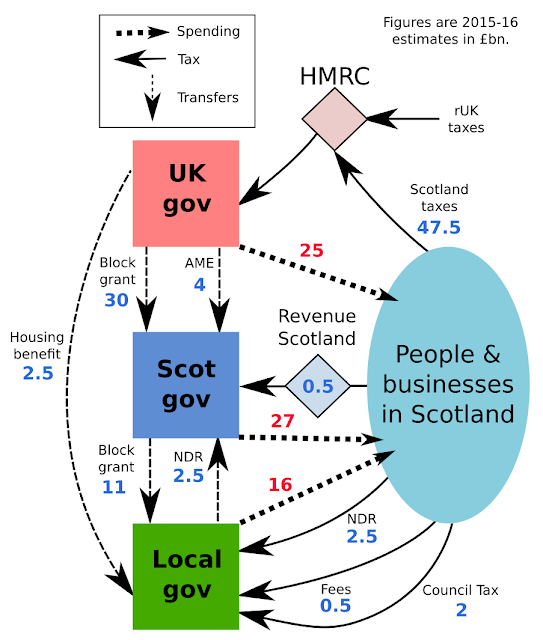 This diagram shows flows of funds through Scotland’s three levels of government and its economy in 2015-16.

Spending represented by dotted arrows is controlled by the level of government shown, with just over 60% of spending controlled either by the Scottish or Local Government (councils).

Although HMRC collects the majority of Scotland’s taxes, the Scotland 2016 Act (Smith Commission) has put 40% of Scotland’s total tax revenue under devolved control. This means that tax rates and other rules can be set in the Scottish Government budget independently of any decisions at Westminster. The 40% figure includes a portion of VAT revenues that are said to be 'assigned' because under EU rules, there can only be one VAT rate within a member state.

If you add up total public expenditure into Scotland it comes to £68 billion and the tax revenues total to £53 billion. The £15 billion difference is the fiscal budget deficit. This figure does not appear in the Scottish Government’s budget, which must be balanced by law, but is instead handled at the UK level where the overall deficit is matched by borrowing.

Some frequently asked questions about this diagram are answered in this blog post, and you can play with an interactive version where you can explore fiscal consequences of full fiscal autonomy, independence, ending Barnett or scrapping councils or the Scottish parliament.

This diagram drew on research from many sources, but the main ones are given below. I will update it to use more recent data but this requires quite a bit more research because of the new fiscal powers of the Scottish Government, especially around taxation.
This graph was published in A Nation Changed? The SNP and Scotland ten years on. A book with contributions from various authors edited by Gerry Hassan and Simon Barrow.