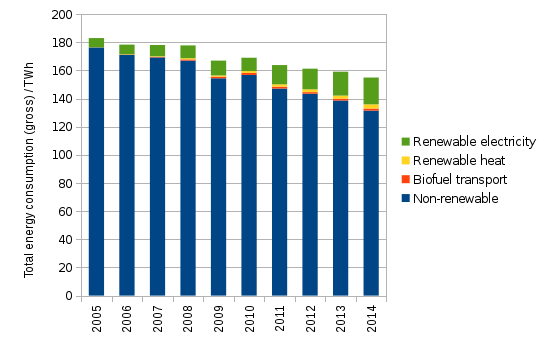 Energy consumption has been steadily decreasing due to increased efficiencies of central heating boilers and car engines, and to a lesser extent, improvements in electrical devices such as TVs and light bulbs. The reduction in 2009 was caused by the recession in which businesses, especially those involved in manufacturing, reduced their activity.

The amount is ‘gross’ because it includes losses such as those in transmitting electricity on power lines. One TWh (terawatt-hour) is a billion kWh (kilowatt-hour). Running Scotland's entire society in 2014 consumed 155 TWh of energy which equates to about three standard 1 kW electric fire bars being left on for the whole year for each person in Scotland. This would be yet higher if we were to include energy consumed in the production of imported goods and services.

By final use, 53% of energy consumption involves burning fuels directly for heating, 25% is burned for transport, and 22% is used as electricity.

Data used here is sourced from the Scottish Government publication Energy in Scotland 2017.