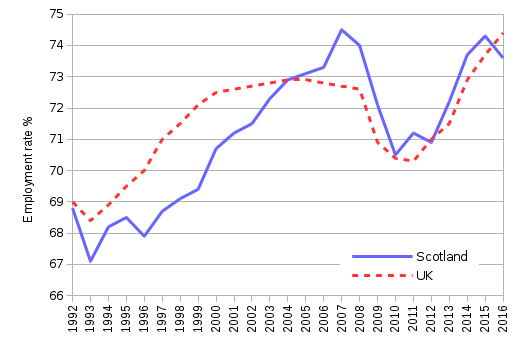 The employment rate is the percentage of people aged from 16 to 64 who are in work.


Each person aged 16-64 is placed into three categories in the statistics: employed (has a job), unemployed (seeking a job) and economically inactive (no job and not seeking one). The employment rate is the number employed divided by the sum of all three. The unemployment rate however is the number unemployed divided by the sum of employed and unemployed. For this reason the two rates do not add to 100% and it is possible for both rates to decrease (or increase) at the same time as happened in 2016.

The dip in Scotland's employment rate in 2016 was due to a rise in the number of people economically inactive. Further detail on this can can be found in the Scottish Labour Market Trends report from the Fraser of Allander Institute and Scottish Centre for Employment Research.

The data shown in the above graph are UK Office of National Statistics data series LF42 (Scotland) and LF24 (UK).