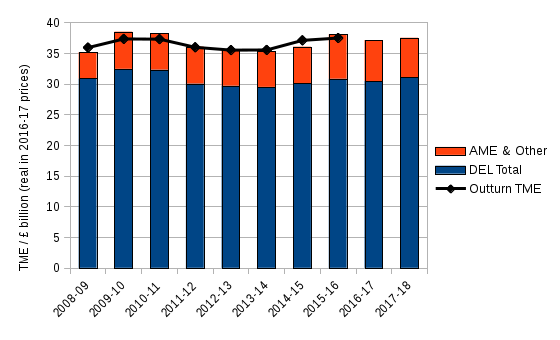 The bars show the total planned spending in budgets proposed by the Scottish Government and passed by vote in the Scottish Parliament.

DEL stands for Departmental Expenditure Limit which are set in spending reviews spanning several years for costs that can be planned in advance, such as building a hospital or paying teachers.

The Outturn TME shown by the line is what was actually spent in each year. Note that the budget was significantly exceeded in 2008-09 by £0.8 billion (during the recession), and in 2014-15 by £1.1 billion (for NHS & teachers’ pensions shortfall) requiring amendments to the Budget Act in the Scottish Parliament and an extra transfer of funds from the UK government.

The Barnett formula only relates to funding the DEL component, and is a simple mechanism which relates changes in English spending in devolved areas, such as education and the NHS, to changes in funding for the devolved administrations.

AME is not funded in this way which means that several billion pounds of Scottish Government spending is funded on a needs basis, that is, if the law requires further spending on the pensions of teachers or NHS staff, then the UK government must provide the funds. This is also true of state pensions for the general population and other welfare benefits which are paid directly by the UK government which dominates the UK level figures shown on the fiscal flow diagram.

Budget figures are drawn from the Scottish Parliament Information Centre (SPICe) spreadsheets for 2016-17 and 2017-18.

The budget figures are adjusted to account for inflation by using HM Treasury GDP deflators published in Sept 2016. These are not the latest deflators but are the ones used by SPICe in the spreadsheets mentioned above.