The previous post in this series found evidence of an association between inequality, as measured by property prices, and pupils attending schools outwith the council area they live in. This post will look at how this has changed in recent years in the Greater Glasgow hot-spot involving the councils areas of East Renfrewshire, East Dunbartonshire and Glasgow City.

Let's start by looking at percentages of pupils who attend a secondary school in a local authority but live elsewhere.1 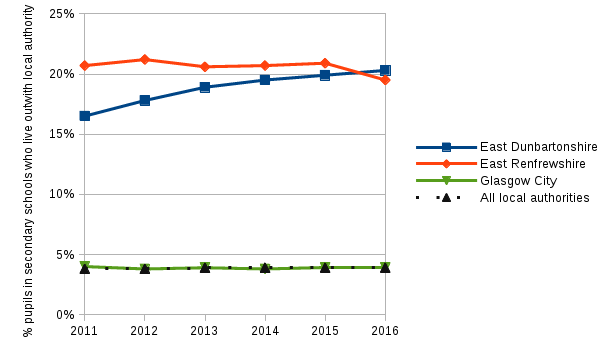 Glasgow City is never far from the national average: the black line and symbols sit on top of the green ones. About 4% or 1 in 25 secondary pupils in Glasgow schools live outside Glasgow.

The two affluent suburbs of Glasgow are quite different, having percentages in 2016 that are close to 20% or 1 in 5 pupils. The percentage for East Renfrewshire has fallen slightly in the last year but the East Dunbartonshire percentage has climbed from 16% in 2011 to 20% in 2016.

Now let's look at percentages of pupils who live in a local authority but attend a secondary school outwith it. 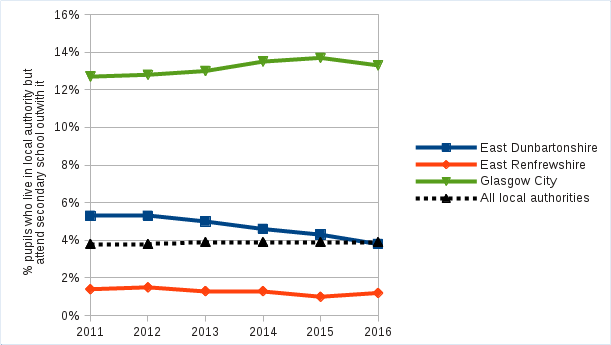 As you might expect, the situation is reversed.  About 13% or 1 in 8 secondary school pupils who live in Glasgow attend school elsewhere. For East Dunbartonshire this percentage has fallen to the national average in 2016 but East Renfrewshire remains well below it at about 1%.

If we add together the numbers (not percentages) of secondary pupils in East Dunbartonshire and East Renfrewshire who live elsewhere then that comes to about 80% of the number who live in Glasgow but attend a secondary school outwith it. Further, the gently climbing trend for East Dunbartonshire in the first graph is consistent with Glasgow's slow rise in the second. Also, the dip in 2016 is also consistent with the drop for East Renfrewshire in the first graph.

What we have here is clear evidence that points to what many people believe anecdotally: there are many parents in Glasgow who believe their children's education is better served by a school in one of these more affluent suburbs.

But there's still a jump needed to reach this conclusion. Nothing in data presented thus far says why so many pupils living in Glasgow are going to school in East Dunbartonshire and East Renfrewshire.

Also, the trends we can see above come from changes in numbers of secondary pupils in S1-S6 (all secondary years). If there's a change in admission policies in a particular year then that will mainly affect only S1 numbers. This means the effect will be much diluted in the S1-S6 total. In other words, the dip for East Renfrewshire in 2016 and the slow rise for East Dunbartonshire are likely under-emphasising changes in admissions of new pupils.

There are a number of possible reasons for the flow of pupils from Glasgow to the suburbs. The most of obvious one involves the placing request system, but some of it will be due to exclusions and for other social or educational reasons. If placing requests are the main explanation and this is driven by parents believing, rightly or wrongly, that suburban schools offer a better education, then it is worth looking to see if there are accompanying trends in home prices.

The graph below shows median home prices for Q2 (April to July) of each year. The prices are not adjusted for inflation.2 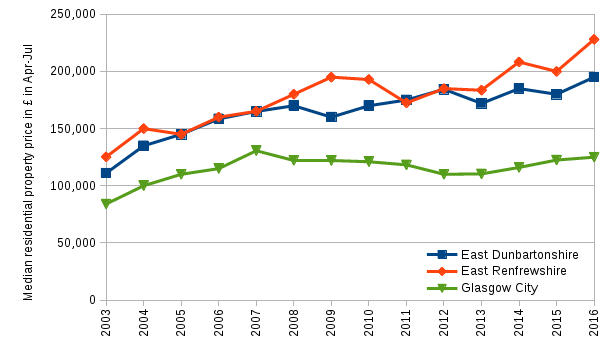 Initially, prices in all three rise together, though the suburban prices start significantly higher than Glasgow in 2003. The rises continue until the financial crisis of 2008 after which Glasgow prices fall for five years and then recover. As yet they've not quite attained their post-crisis peak of 2007. (Remember, there is no adjustment for inflation here - Glasgow prices have fallen significantly in real terms.)

In contrast, although suburban price growth falters post-2008, the prices mostly stay above their 2007 values and there is still an overall upwards trend so that by 2016 the gap between Glasgow and its suburbs has grown substantially.

The East Dunbartonshire median price grew from being 32% higher than Glasgow's in 2003 to 56% higher in 2016. The figures for East Renfrewshire are even larger being 49% in 2003 and 82% in 2016. (In this data set, East Renfrewshire and Shetland are the only two Scottish council areas that have seen a real terms growth in median home prices since 2007).

The drop in East Dunbartonshire's and East Renfrewshire's prices between 2014 and 2015 (remember, both are for Q2 on this graph) is because the Scottish Land and Building Transaction Tax (LBTT) replaced Stamp Duty in Scotland from 1 April 2015, the start of 2015Q2. This had the effect of creating a spike in prices at the upper end of the housing market in 2015Q1, presumably because buyers hurried their purchases to avoid a tax increase caused by LBTT. For this reason, the 2015 value is anomalous but the jump in prices between 2014 and 2016 is believable.

It's clear that housing in Glasgow's affluent suburbs has a premium relative to the city itself. It is also clear that this premium has significantly increased over the last 13 years. But how might that be linked with where pupils attend school?

If parents perceive a school outside their council area offers a superior education and want to move their child to it then they have two choices: put in a placing request or move into that area. Of course, the latter choice will not be available to less well off parents.

For East Dunbartonshire the above graphs provide evidence, albeit indirect, that suggests both methods have seen an increase between 2011 and 2016. The percentage of East Dunbartonshire pupils living elsewhere has increased from 16% to 20% and the premium on house prices rose from 48% to 56%.

East Renfrewshire, however, saw a much larger rise in price premium over Glasgow, going from 46% in 2011 to 82% in 2016. In that time, the percentage of pupils residing outside the council area has fallen slightly which suggests that placing requests are being turned down. This would explain why the East Renfrewshire premium is so much higher than East Dunbartonshire: parents that are denied placing requests decide to move into the area, if they can afford it.

This article by Andrew Denholm in the Herald confirms that, for reasons noted above, the drop in accepted placing requests is more dramatic in East Renfrewshire than the above graphs suggest:

So, in summary, with the usual caveat that correlation does not imply causation, the trends in property prices are consistent with the explanation that a significant minority of parents in Glasgow are preferring to educate their children in suburban schools.

You may be wondering why I have not yet looked at placing request data in this series of posts. The reason is simple enough: such data is no longer published by the Scottish Government.

There was a detailed annual report on placing requests that was rigorous enough to have "National Statistics" status, but the last publication was in 2010 for the 2008-09 school year. I received a prompt response when emailing the relevant person in the Scottish Government to ask why publication had ceased and was pointed to the result of this consultation, and advised that the only way to get the data now was to ask each of the 32 councils individually.

I was hoping to have my hands on more placing request data by the time I reached this third blog post, and I have found others who have trodden this path, such as the Sunday Post, but it seems that obtaining the data is going to take longer than I had anticipated and will likely involve some Freedom of Information requests. I will write more when I have the data.

Until then, I'll leave you with a few thoughts on why investigating this issue matters.

Firstly, people are very quick to express opinions on both education and inequality but much slower in providing evidence, and what evidence is proffered is often anecdotal. These blog posts are documenting my attempt to work through some evidence and clarify the assumptions needed to interpret something useful from it.

Secondly, it is true that across most of Scotland there is no strong link between inequality and choice of (state) school. In fact, Greater Glasgow is the only clear example of it in Scotland, with the Clackmannanshire-Stirlingshire situation being explicable in terms of the location of Catholic schools. Usually, I would avoid dwelling on an exceptional or unusual case, but the effect we see in Greater Glasgow is revealed because it has the highest population density of anywhere in Scotland. In other words, the underlying problem of inequality's effect on education may well be more widespread but it only finds expression through parental choice in Greater Glasgow because schools in areas with contrasting demographics are so close to each other.

Finally, as any teacher will tell you, their work and the resources available to them are only one part of a child's education. A large part of it depends on the parents and the aspirations of others around them, including competition within a pupil's peer group. So if a school is deemed to be under-performing, simply pouring resources into it is a mere whistle in the wind if the real problem is poverty in the community around it.


1. The first two graphs in this post are constructed from the supplementary data set for the 2016 pupil census which extends back to 2011, though an older report gives values for 2010. I've not included the 2010 data because they don't alter the trends significantly and also I wasn't sure if data from the different reports were comparable. A spreadsheet with all data and calculations will be provided in a future blog post.

2. Quarterly house price data is taken from this publication from Registers of Scotland. Aggregating quarterly medians to form annual medians requires raw data that is not published in this release. Instead I chose to use only Q2 data (Apr-Jun) because it is the quarter that usually has the greatest number of property transactions. Concentrating on the same quarter of each year also avoids problems with the large seasonal variations seen in property sales data.
Posted by mcnalu at 16:23