I was hoping to move on from the economy and look at a pile of education-related stuff, but one aspect of this year's GERS report caught my attention. Rather than shoe-horn anything further into the last post I thought I'd write this fresh post.

In the previous post I noted that Scotland's onshore GDP grew by 1.0% whereas onshore revenue grew by 4.0%. In this post I'd like to explore why these two numbers are so different. The issue is this: if our economy is sluggish in producing more stuff, how can more taxes be generated from our earnings (income tax and national insurance), profits (corporation tax) and shopping expeditions (VAT)?

First of all, let's give the question a bit of context by looking at the history of growth rates for GDP and revenue (Table S.1 from GERS with inflation correction using HM Treasury deflators). 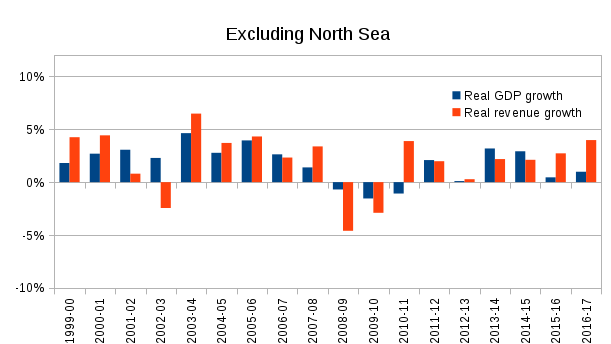 As you can see the last couple of years are quite unusual, with only 1999-00 and 2007-08 showing similarly low GDP growth and high revenue growth. The year of the great financial crisis is not exactly a precedent we'd wish to follow, but let's not jump to any conclusions.

The next step is to see how different taxes contributed to the rise in revenue. To do this I've broken down the 4.0% rise into the individual taxes that contributed to it. Also, I've done the same for the 4.1% rise in UK revenues (which include the North Sea, though it's heavily diluted in the much larger UK economy). 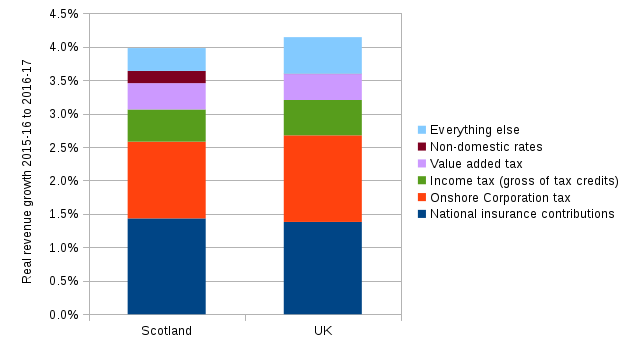 As you can see, Scotland and the UK's very similar percentage rises have very similar explanations. The only notable difference is that Non-domestic rates (levied by councils on business properties) contributes a small slice of growth in Scotland but next to none in the UK as a whole.

So that gets us an important step forward, in that, barring extraordinary coincidences, the revenue growth is a UK-wide phenomenon, not peculiar to Scotland.

Just under two-thirds of the revenue growth comes from National Insurance and Onshore corporation tax. This is odd because these taxes are quite unrelated. The former is essentially a tax on income and the latter is a tax on company profits. Also, if a rise in incomes caused the national insurance take to rise, why is the income tax rise relatively modest?

Next, I went to the Quarterly National Accounts Scotland (QNAS) that were released on the same day as GERS, and looked to see if "Compensation of employees" (Table F) showed any impressive increase. Its real growth turned out to be a paltry 0.7% which ruled it out as the culprit. However, this leaves only one other place to look: the tax regime itself.

A bit of web searching soon revealed that changes came into effect in April 2016 which caused National Insurance Contributions to rise, and it was regressive in that folk on lower incomes experienced larger rises in percentage terms. More than that, the Office of Budget Responsibility (OBR) forecasted a big rise in the flow of revenue to Government coffers as a result. This, plus a modest rise in incomes, evidenced by the green income tax bit in the bars above, can explain about half of the total revenue growth.

Most of the rest is down to corporation tax and the explanation for this is quite different. It seems that company profits have indeed jumped up in 2016-17. There's no single reason, but this FT article entitled the Riddle of UK's rising corporation tax receipts offers a few likely causes, including:
Another plausible reason is related to the final two points. Companies fear that any current boost to their profits may be temporary and business will get tougher due to Brexit in the years ahead. This makes them reluctant to raise wages now because they expect they would have to be lowered again in the near future, and lowering wages is harder than raising them. This explains why companies are holding onto their current gains but wage growth (see 0.7% mentioned above) is much lower.

And with that we have now explained almost all of the growth in revenue. Of course, the National Insurance change is a one-off growth spurt, and although the corporation tax surge could well continue for a while, the effects of present weak investment and Brexit uncertainty lurk in the not-too-distant future.

PS Thanks to George S. Gordon for a Twitter conversation that helped me get my head around this stuff.

Edited 8/9/17 09.38 to insert penultimate paragraph on poor wage growth relative to profits.
Posted by mcnalu at 22:20