This is the first in a series of posts looking at placing requests and what, if anything, they can tell us about how educational inequality varies across Scotland. In a return to what was the original format on this blog, I'm going to keep posts short and focused with only one or two graphs or tables per post.

It would be a rare child that would ask "how do I get the most out of the life ahead of me?" The answer that well-meaning adults would give, and often do give even without being asked, is "work hard". But if we were being more honest we'd say "Work hard, but first make sure you were born in the right place, with the right parents."

With this in mind, one way to assess educational inequality is to look at how parents choose to educate their children and how this varies across the country.

The map below shows hot-spots where large proportions of pupils attend schools outside the council area in which they live.1 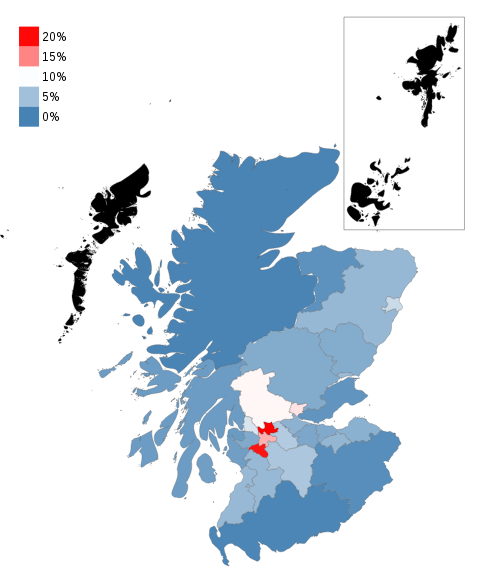 The hottest spot is around Glasgow, though all urban areas around Edinburgh, Stirling, Aberdeen and Dundee show elevated levels. Rural areas, such as the Highlands and Dumfries & Galloway and the Borders, show the lowest levels. No data is published for the Western Isles, Orkney and Shetland (coloured black) which, according to a note in the source data, is to "prevent disclosure", which I presume means that the numbers involved are so small that individual pupils could be identified.

The table below shows more detail for the top 10 hotspots shown on the map. 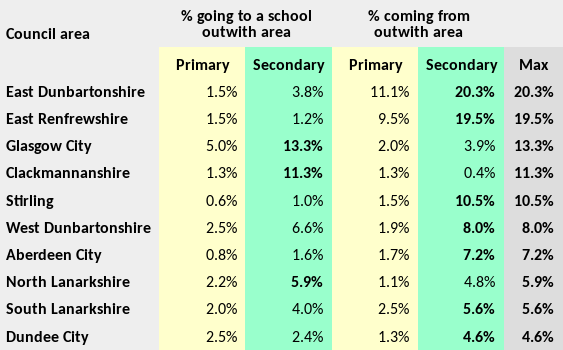 It's perhaps easier to understand it with examples:
The "Max" column shows the maximum for that row. This is used to order the rows in the table and also to colour the map.

The average percentages for the whole of Scotland are 1.9% for primary schools and 3.9% for secondary schools. (If you think about it, these percentages must be the same for the "going" and "coming" columns.)

There are two points of note here.

The second is that the affluent Glasgow suburbs of East Dunbartonshire and East Renfrewhire top the table with about 1 in 5 secondary pupils coming from elsewhere. Glasgow City is third with about 1 in 8 secondary pupils residing there but attending school outside Glasgow. It is of course not a coincidence that these council areas are next to each other. Stirling and Clackmannanshire are similar in that they are neighbouring and have high but opposite percentages for secondary schools.

In summary, we have found some clear patterns in this data. Specifically, it seems that parents in Glasgow are sending their children to suburban schools, with a similar but smaller effect from Clackmannanshire to Stirling.

In subsequent posts I'll look at this in more detail and see what it can tell us about inequality in education. In the next post I'll look more closely at the main hot-spot around Glasgow.


1. The data used to construct the above map and table are for 2016 and were taken from the supplementary data set for the 2016 pupil census. A spreadsheet with all data and calculations will be provided in a future blog post.
Posted by mcnalu at 17:52