The previous post showed that Scotland's economy has been growing more slowly than the whole UK's economy in 2015-16. A likely explanation is that the dramatic slowdown in the North Sea industry, caused by the crash in oil prices in 2014-15, has had an effect on the onshore economy. This is plausible and commonly asserted, but can it be backed up with evidence? Here's what I found by taking a closer look at North Sea oil price, production and investment.

In the last post we saw that Scotland's GDP including a geographic share of North Sea activity was highly volatile. The UK's GDP also includes the North Sea but its volatility is heavily diluted in the UK's much larger onshore economy. To put numbers to this, North Sea activity has typically been 1-2% of UK GDP, but 10-20% of Scotland's, which is shown in the graph below. 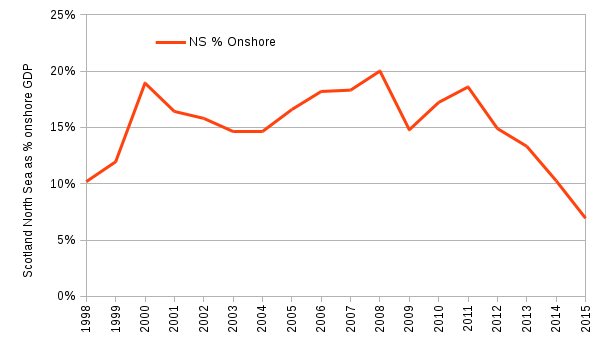 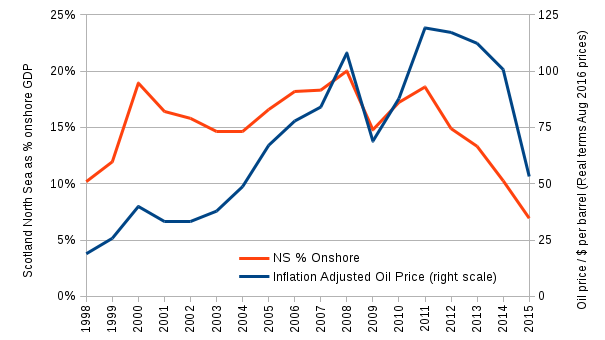 The next graph shows total North Sea production of oil and gas for Scotland's geographic share. (The units aren't crucial for our purposes. They are millions of tonnes of oil equivalent or mtoe which allows combination of both oil and gas production in a single figure.) 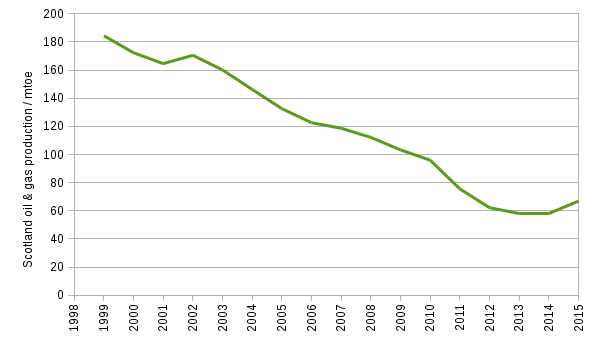 The long term trend of falling production explains why the decline in North Sea GDP (red line) from 2011 to 2013 was more rapid than suggested by the fall in oil price. However, production levelled off, so the 2014-15 bit of North Sea GDP's fall is solely due to the price. In fact the fall would've been larger were it not for a slight rise in production in 2015, the first rise since 2002.

This provides a more complete picture of the fall in North Sea GDP, but it doesn't explain how it affects the onshore economy. That requires digging into the definition of GDP.

This bit gets a little more involved, so feel free to cut to the chase by skipping to the summary at the end if you don't like European accounting standards and NUTS regions (a sure sign of sanity).

So far we've tacitly assumed that GDP is mainly made up of sales of oil and gas, the value of which is equal to the amount produced multiplied by the price. However, GDP is designed to measure all economic activity and so has a component that measures investment, which, in this context, means money spent on North Sea infrastructure and prospecting for future oil and gas fields.

But is this assumption valid? Specifically, is it OK to assume that the bulk of North Sea GDP is the value of the oil produced rather than investment?*

The graph below shows investment (referred to elsewhere as capital expenditure) associated with North Sea oil and gas extraction shown as a percentage of onshore GDP (blue) and North Sea GDP (red). 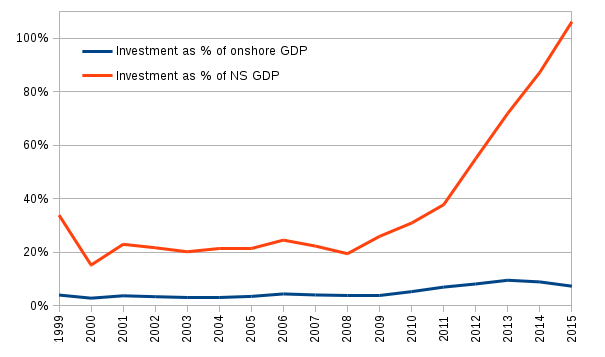 Investment in the North Sea as a percentage of Scotland's onshore GDP (blue, though the scale makes the changes hard to see) varies from 2.9% in 2000 and peaks at 9.6% in 2013. Although these may seem like small numbers they are actually colossal levels of investment for a single industry. Compare it to total investment (Gross Capital Formation) for all Scotland's onshore industries in 2013 which was 16.6% of onshore GDP.

But the truly remarkable feature is the rise of investment as a percentage of North Sea GDP. It sits around 20% until 2008, and so our assumption above looks OK — the bulk of North Sea GDP was production — but, after 2008 it shoots up to exceed 100% in 2015! This isn't just remarkable, it seems impossible.

Before tackling this arithmetic-defying growth, it's worth explaining why investment shot up even though GDP was falling. The reality of high oil prices from 2008 onwards, despite the 2009 drop, led to oil companies being optimistic about the future. They expected the oil price to stay high, and had sold oil on futures contracts with a guaranteed price, so they were willing to invest to boost production in the future. It was a gamble, as is necessary in any business, but it was both an informed and hedged one.

This explains the rise investment, but how did it exceed 100% of GDP if investment is usually counted as part of GDP?

At this point it's important to understand a little more about the EU's ESA10 accounting standard. It divides the UK up into 12 so-called NUTS regions, namely: Scotland, Wales, Northern Ireland and nine regions of England. All North Sea activity is placed into a separate 13th region labelled UKZ (sometimes referred to as ex-regio). It is the ESA10 system that defines Scotland's onshore economy (which gets the unromantic region label UKM) and this is why Scotland's official GDP is onshore only. The majority of the UKZ region (currently over 80% of GDP) counts as Scotland's geographic share, though this share is not specified by ESA10, instead that's done by academics and civil servants in the UK and Scottish Governments.

Returning our attention to the investment puzzle (and well done for making it through the last paragraph), much of the investment is spent on materials and services from companies that are not based in the UKZ region, and since UKZ is landless, the companies are bound to be based elsewhere. This means this activity is an import* into the UKZ region and so is not included UKZ's GDP, but in the GDP of wherever those companies are based. Even in this age of rapid internet communication, companies still prefer to be based close to where the action is, and so many providing services to the North Sea industry are in Scotland, with a particular concentration around Aberdeen.

If this is correct, then we should see some evidence of a rise in the onshore GDP under the Scottish National Accounts heading "Mining and Quarrying", which, despite its name, is dominated by the oil and gas industry (see Sources sections at the end for more).

The next graph shows how the Mining and Quarrying component of onshore GDP has changed. The figures are inflation adjusted and indexed to 100 in 2013, allowing us to show the index for onshore GDP (red) for comparison. 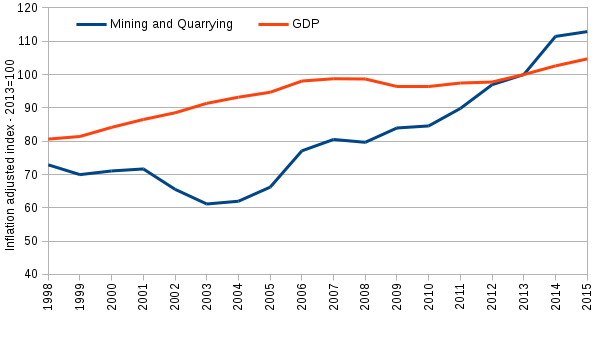 The time profile of Mining and Quarrying (blue) on this graph doesn't resemble that of total onshore GDP (red), but it does share several similarities with that of North Sea investment in the previous graph. There's an increase in 2005 to 2006, then a more sustained rise from 2009. The correspondence isn't exact because other activities are included under the Mining and Quarrying heading (such as actual mining and quarrying), and some onshore North Sea-related activities will be under other headings, or go to companies based outside Scotland.

Finally, as these services take place in Scotland (UKM) but are done in return for monies coming from UKZ, they should show up as exports from Scotland to the rest of the UK. And this can be seen in the input-export tables published by the Scottish Government in which several billions worth of such exports can be found under the heading Mining Support (see Sources section below).

So what we've found here is evidence of a connection between the offshore investment and a part of the onshore economies and with it a link to the recent story of changing oil price and production.

North Sea production has been falling for most of the last 20 years but North Sea GDP remained relatively stable until 2011 because of the rising oil price. The price peaked in 2008, and despite a dramatic fall in 2009, it recovered and returned to high levels from 2011 to 2014. But, North Sea GDP fell during these years because production continued its decline. Oil companies, believing the new high price would last, invested heavily to boost future production.

By the time a small rise in production was achieved in 2015, the oil price had crashed again to under half its peak value and this time there was no recovery. The net result of this was the unprecedented fall in North Sea GDP that began in 2011 and which has continued right up to the most recent data available in mid-2016. The outlook for the industry is described in this article by Douglas Fraser.

Since North Sea activity is accounted for in a separate region to Scotland (and indeed all the UK's countries), it's not easy to assess how the slowdown in the North Sea economy affects the onshore economy. However, it is possible to trace the dramatic rise in investment by oil companies to some sectors in the onshore economy.  And it is through such connections that recent substantial falls in North Sea GDP have been transmitted to the onshore economy thus hampering Scotland's recent economic growth.

*North Sea GDP in region UKZ is best thought of here in terms of the expenditure approach, i.e. Y = I + X - M where Y is GDP. Exports X represents the sale of oil and gas products. I represents investment and because this involves materials and services bought from elsewhere (the North Sea region is landless), imports M can be as large as I. For this reason, I can exceed Y. Consumer and government spending (C and G) are negligible.