Scotland's economy has been growing more slowly than the UK's recently. This post examines this difference in growth and sets the scene for subsequent posts which look into what might explain it. See this post for an explanation of GDP and this one where I previously looked at Scotland's North Sea GDP.

Scotland's official GDP is onshore-only in that it excludes North Sea oil and gas. We'll work with real GDP, which corrects for prices to remove inflation, and look at annual growth rates that compare GDP from one quarter to the same quarter in the previous year (QoQ4). The data starts in 1998Q1 and goes up to the most recent available quarter: 2016Q2 for Scotland and 2016Q3 for the UK. 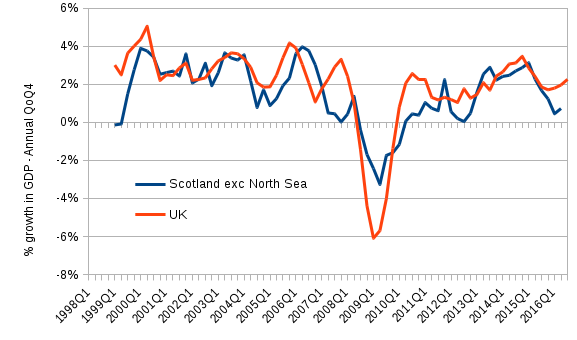 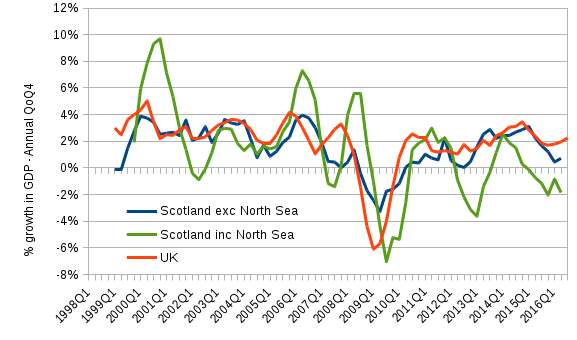 The addition of North Sea GDP introduces a lot of volatility. This is mainly due to dramatic variations in the price of oil, and to a lesser extent the amount of oil that's produced.

But now the gap (between green and red) appears much wider in 2015-16, with Scotland's growth rate being 3pp below the UK's. Not only that, it's been negative from 2015Q1 which means by this measure Scotland has been in recession since then.

Another interesting difference can be seen around the trough of the recession. Scotland's recession is not only deeper with North Sea activity included but it is also delayed. This is because the oil price stayed at its peak value as the recession began and only started to fall in late 2008.

Some of Scotland's onshore industry provides services to the North Sea. This includes everything from safety consultants and geologists through to hotels and restaurants. Also, many people employed in the North Sea industry, on rigs, shipping and aviation, live in Scotland and so spend their earnings there. In these ways, changes in North Sea activity can feed into the onshore economy.

There are some features on the graph that might well be due to this connection. There's a peak in Scotland's onshore growth rates (blue) in 2006 and another in early 2008 at the onset of the recession when oil prices reached an all-time high. Neither has a counterpart in the UK growth rate (red). Also, the negative growth rates (green line) from early 2015, caused by the most recent oil price crash, offer a clue as to why Scotland's onshore growth has weakened recently.

In summary, Scotland's growth has been weaker than the UK's in 2015-16 and the gap in rates is greater if North Sea activity is included. This situation is not unprecedented in the history of rates shown above. Although it's plausible that the North Sea slow down is dragging the onshore economy, the data here provides only circumstantial evidence of it.

The next post will take a closer look at oil price and production and how they relate to North Sea GDP in an attempt to build up a better understanding of how Scotland's two economies are related.

It's a good question, so using per capita data from the Scottish Quarterly National Accounts and series IXHW from the ONS for UK per capita GDP, I made this graph to answer it: Using per capita figures (i.e. dividing GDP by the population then calculating the growth rate) lowers growth in the last decade because the population of Scotland and the UK were both growing, and since the UK's was growing faster, its growth rates are lowered slightly further. However, the main features of the graph are still to be seen, including the gap that's opened up in the last few quarters, although it is a bit smaller.