Scotland's 2017-18 Draft Budget was presented in the Scottish Parliament today and yesterday proposals to alter taxation, specifically to raise tax rates, were voted down. In this post I'll take a look at how Scotland's unique fiscal arrangements can lead to the counter-intuitive situation where tax rates go up but cause a modest boost to collective income (i.e. GDP). Even if the effect is small, it serves to highlight the distinction between the technical, moral and electoral issues surrounding taxation.

Raising tax rates means taking a greater share of income from households and businesses — the private sector — and giving it to the public sector. Understandably, most people see this as reducing their income which is why raising taxes is a near certain way to lose votes.

But, when you consider it more carefully, especially in the context of the new tax powers wielded by the Scottish Government, it's not nearly so clear cut. Consider two facts about taxation.

Firstly, the greatest share of total tax revenue comes from the highest earners. It's not hard to see why: a) they earn the most b) tax rates increase with income.

Secondly, the higher your income, the greater the fraction of it you are likely to save. Again, it's not hard to see why. If you are on a low income, you might need to spend all your money to provide the basics of shelter, food and warmth. Those on much higher incomes have the luxury of choice, such as whether to save £10,000 per year or use it to buy a Mercedes instead of a Ford.

The decision to save or to spend has an impact on the economy. If a higher income earner decides to save by stuffing notes under their mattress, the money will leave the economy and do nothing. Even if the money is saved with a bank there's no guarantee it will be used productively. If a bank cannot see a way to make a return by lending, the money is effectively stuffed under a financial mattress. Even if such deposits do somehow cause a bank to increase its lending there's no guarantee that saving money with, say, The Royal Bank of Scotland, will lead to a loan that gets spent into the Scottish economy.

Whatever way you look at it, money that is saved is less likely to find its way into the productive economy. Much of it will pile up as wealth, probably with those who are already most wealthy.

Now consider what might happen if the Scottish Government ups tax rates as illustrated in this diagram: 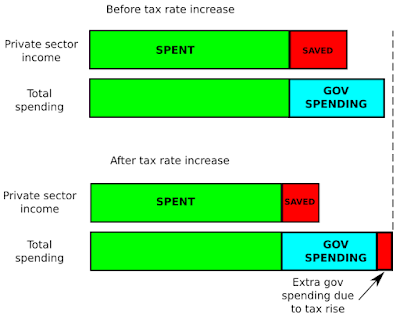 After the tax rate rise, all else being equal, the amount spent by the private sector reduces slightly but the amount saved decreases by more. This is the likely result if the tax rate rise is directed at higher earners for the two reasons given above. The blue amount of government spending is the same as before but there is also extra spending funded by the new tax take.

In other words, a portion of the money that would have otherwise been saved is now placed under the control of the Scottish Government and is almost guaranteed to be spent.

Suppose for example that the extra tax take is used to recruit and employ new teachers. People at the start of their career are more likely to spend all their income because not only are their salaries lower, but they will likely be setting up homes and starting families, all of which involves spending into the Scottish economy.

Even if the government spent the extra tax take on something daft, such as painting the Forth Bridge a different colour every six months, the money paid to the army of painters would still find its way into the Scottish economy. In fact, as long as the government doesn't splurge money on imports or direct it at the already wealthy, its spending will serve to increase everyone's collective income. That is, it will boost GDP.

There are two assumptions implicit in the above. The first is that raising tax rates raises the amount of tax revenue. This is likely but not a given. For example, raising rates of tax on high earners who can afford multiple homes and good accountants could result in them moving their incomes elsewhere, most obviously to England if tax rates are lower there. For this reason, estimating the extra tax revenue involved is not easy and a very large increase in tax rate may even lower collected tax revenue (the much contested Laffer Curve).

The other assumption is that people's desire to save does not change. Economic ill winds from abroad, or an oil price shock, or the tax rate hike itself can spook consumers so that they become nervous about the future. The usual result is that people spend less, save more and economic activity is hampered, possibly causing a recession with a drop in GDP and job losses.

External and uncontrollable influences not withstanding, both assumptions are reasonable if the tax rate change is small and targeted only at higher earners. For instance, higher earners are unlikely to incur the cost of moving home or making major changes to their tax arrangements for a small increase in tax rate that doesn't impact their current or future standard of living.

Separate to political and technical issues of tax, there are questions of morals and values. In fact, nothing written above addresses these. There is no contradiction if an individual accepts the validity of the above argument but objects to the call for tax rate rises because they believe it is best to let the private sector take decisions on spending (and saving). A contrary position would be, say, to argue that tax rises are essential to fund the NHS or else it will not have the staff needed to maintain current standards of care.

I am not saying that these two positions are equal (nor that I have no preference personally for one over the other), my intention is just to point out that they raise questions that are quite distinct in nature to what has been argued above.

Questions on whether tax changes are justified on grounds of economics or values have unfortunately been conflated in the political rhetoric. If the Scottish Government wished to mitigate UK Government austerity, which the First Minister has openly criticised, then the above argument suggests that it can do so by raising tax rates and, all else being equal, it could be done in way to give the economy a wee boost too.

However, I suspect the reasons behind the Government making only very minor tweaks to taxation in the 2017-18 budget are neither economic nor driven by values. Instead it is what might be expected from a party that is in a strong electoral position and is cautious in making changes that may lose them votes.

A more detailed version of the argument made in this post can be found in this post. But be warned, some mathematics is involved.