The Scottish Government's Draft Budget for 2017-18 was presented to the Scottish Parliament on Thursday. Much of the analysis has centred on comparison with last year's budget, especially on money given to councils. In this post I'll try to take a longer term view and update figures that appear in Chapter 5 of the book. 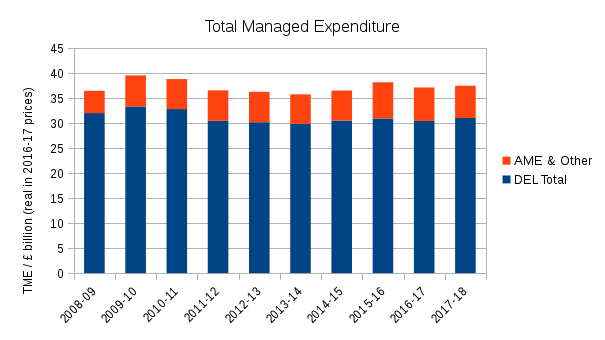 * I took DEL, AME & Other figures, which sum to give TME, directly from each individual Scottish Draft Budget. This history is not published in one place.  Figures comparable with later years don't seem to be available from before 2008-09. The split into DEL and AME & Other isn't of immediate concern here — see this post for more detail on what these terms mean.  As done in the Draft Budget, HM Treasury deflators are used to adjust for inflation.

The height of the bars represent Total Managed Expenditure (TME) which is the amount the Scottish Government plans to spend in a financial year. This total is set by the block grant from the UK Government plus all taxes under devolved control. Previously these taxes included some limited changes to income tax, NDR (business rates), SLfT (landfill tax), LBTT (stamp duty on property sales) and a few others. For the first time in 2017-18 the Scottish Government controls all rates and bands for income tax.

What the graph shows is that in real terms (i.e. accounting for inflation) the total budgeted spend peaked in 2009-10 then fell to reach a minimum in 2013-14. This fall was caused by austerity under the coalition UK government. Since then spending has risen slightly.

There's been much attention to the amount given to councils by the Scottish Government. This appears in the Draft Budget under a heading called "Local Government" and is analogous to the block grant that the UK Government gives to the Scottish Government. And, in a similar fashion to that, the total that councils can spend is set by this amount plus tax devolved to councils which is comprised of council tax and some other revenue (e.g. parking charges, community hall hire etc).

The amount allocated to Local Goverment in each Scottish Draft Budget is shown below as a percentage of the TME** shown in the above graph. 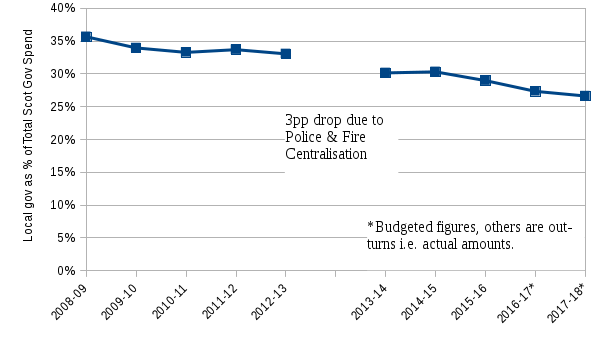 It's clear from this that Local Government's share is declining. The drop in 2013-14 is because the Police and Fire Services were centralised and so its funding was removed from the Local Government heading. However, this only accounts for 3pp (percentage points) of the 9pp drop between 2008/09 and 2017/18, leaving a drop of 6pp.

This drop cannot be attributed to UK Government austerity because that would also reduce TME. If Local Government funding was changed in proportion to a change in funding to the Scottish Government then the percentage would remain constant. In fact, since 2013-14, TME has shown increases whereas the Local Government share has continued to decrease.

There have been other funds made available to councils outwith the Local Government heading which can be viewed as offsetting this drop in funding. This has animated a debate surrounding the 2017-18 Draft Budget with Finance Minister Derek Mackay claiming a £240 million rise to council funding whereas opposition parties claim a £300 million cut.

It is true that the Scottish Government has provided other funding, but it's hard to see these amounts covering the 6pp drop in the longer term. Also, even if they did, there's the question of control and centralisation. These extra amounts are not under the Local Government heading precisely because they're not really under council control: they must be spent as the Scottish Government directs.

A separate but important point is that adjusting for inflation accounts only for changing prices and not for increasing needs. The population is growing and the increasing number of school pupils likely requires a real-terms rise in school spending (largely under the Local Government total) and a growing elderly population means extra pressure on the NHS and social care budgets (with the latter also mainly coming under Local Government). If budgets aren't increased then extra efficiencies will need to be made and once those are exhausted (along with the staff that must implement them) standards of public service will surely decline.

There are ways to alleviate these problems, if the political will exists. The Scottish Government have now given councils the option to raise Council Tax by up to 3%. This can relieve some pressure on council budgets but Council Tax is based on dubious 25 year-old property valuations and is only loosely related to ability to pay. Raising money for public services centrally by raising income tax rates would not only be fairer but also avoid issues of exacerbating existing inequalities between councils.

Of course, the lack of funding for public services originates with the UK Government's nervousness in increasing public borrowing. The Scottish Government has only limited borrowing powers, but it is no longer constrained to follow the UK Government on income tax. Nevertheless it has chosen to set exactly the same income tax rates and make only a small change to the higher tax rate threshold. This now leaves any significant tax raising decision to the councils. It will take some courage to present people with the first Council Tax rise in a decade in the few months leading up to the May 2017 council elections.

This spreadsheet contains all calculations and gives all sources used in this post.

Amended at 14:30 on 18 Dec 2016 because APD was incorrectly described as a previously devolved tax. SLfT is now included as an example of such a tax instead.
Posted by mcnalu at 10:15