Disruptions to ScotRail's train service in recent weeks have had a noticeable effect on my family's daily routine. We weren't the only ones to experience this of course. Concerns spread on social and traditional media and it's now been raised in the Scottish Parliament. Not all of the discussion has been helpful. In this post I'll lay out some recent data on ScotRail's performance and try and put it in a wider context.

Before getting stuck into data on performance, it's worth understanding how our rail services were split into two parts when privatised in the 1990s.

Network Rail handles infrastructure, such as the track, signals and overhead wires across Great Britain (England, Scotland and Wales but not Northern Ireland). Although Network Rail is not a private, shareholder-owned company like its predecessor, Railtrack plc, its status remained ambiguous until 2013 when the Office of National Statistics ruled that it was a government body in the public sector. As a result its debts of £34 billion were added to the UK's public debt.

The train services that run on Network Rail's infrastructure are operated by private companies. They procure and maintain rolling stock, manage staffing and are responsible for many train stations. Trains in Scotland are run by the ScotRail franchise which is awarded to private companies in a competitive tendering process. National Express won the first contract in 1997, and were followed by FirstGroup in 2007 and most recently Abellio was awarded a ten year contract starting on 1 April 2015.

Whereas Network Rail must reinvest any surplus (if it ever made one) in its infrastructure, the private companies could choose to distribute profits (if they can make any) via dividends to shareholders.

The information presented here is mainly from the Office of Rail and Road's (ORR) Passenger and Freight Rail Performance report for 2016 Q2 published in November 2016.

First, take a look at the history of punctuality since 1998. 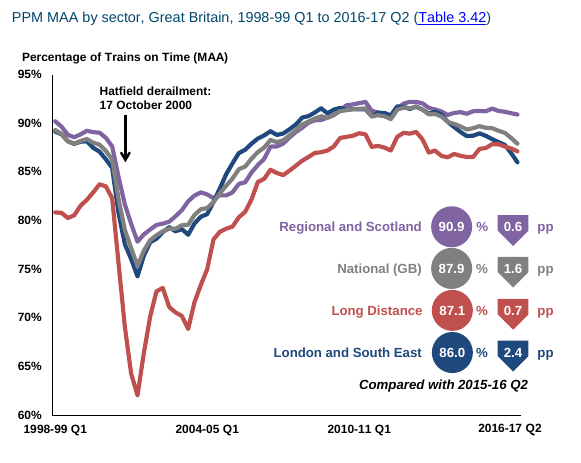 This graph shows PPM which stands for Public Performance Measure and is the percentage of trains that arrive at their destination on-time. On-time is defined as being within 10 minutes of the timetabled arrival time at the final destination for long distance journeys, and 5 minutes for all others. If a train fails to run its entire planned route calling at all timetabled stations it will count as a PPM failure (see end of this page for the full definition).

MAA stands for Moving Annual Average which means an average is taken over the year leading up to the stated date. This smooths out short term variations, emphasising trends and easing comparisons. Information is of course lost in doing this, most notably a 5 to 10 percentage point drop in PPM that occurs every winter (see first graph here).

With this in mind, you can see what the above graph is telling us. Train punctuality fell suddenly in the early 2000s, then had a slow recovery and since 2010 has stabilised at around 90% (except in London and the South East where a decline is evident).

The plummet in PPM in the early 2000s followed the Hatfield derailment in 2000, which killed four people and injured many more. This tragedy prompted an investigation which uncovered serious flaws in track inspection and maintenance that had developed in the years since privatisation (whether it was caused by privatisation is another matter). To prevent many potential repeats of Hatfield, an extensive programme of investment in rail infrastructure was instigated and the disruption caused by these works is why PPM suffered in the early to mid-2000s.

The chart below shows latest PPM MAA figures for Train Operating Companies (TOC) such as ScotRail. These figures are for 2016-17Q2 (Jul to Sep) and the difference from Q2 in the previous year is also shown. Abellio has operated Scotrail during the whole of averaging period for 2016-17Q2, but FirstGroup operated ScotRail for two of the four quarters in the 2015-16Q2 average. 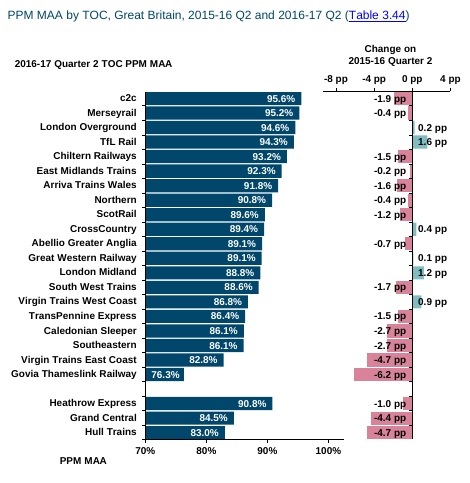 ScotRail sits in the middle of all GB train companies at 89.6% which is a 1.2 percentage point drop on the previous year. This drop is typical of most companies.

The same page also gives statistics on who was responsible for any passenger train delays of 3 minutes or more. For the entire GB network in the year to 12 November 2016, 61% of delays were caused by Network Rail, 29% by the train operator itself and 10% by other operators. For ScotRail these figures are 54%, 38% and 9%. Out of the 22 train operators listed, only three others had larger self-caused delay percentages than ScotRail.

In short, ScotRail's performance has been unremarkable in PPM terms: neither particularly good nor bad relative to rail companies across GB. However, ScotRail ranks near the bottom for self-caused delays.

The numbers presented here do not show that ScotRail has a serious problem. That's not to say it doesn't though. We'll have to wait and see if data beyond 12 November will show what people have reported anecdotally. It is also possible that legitimate concerns have been amplified by both social and traditional media.

Daily PPM data is available, such as from trains.im or uktra.in, and at the time of writing (17.31 on 24-Nov-16) it showed ScotRail as having the fifth worst PPM in GB of 75%. But caution is required over short timescales for a variety of reasons. For example, in the last week it was pointed out that ScotRail's performance was amongst the best in GB, but this was while the southern part of Britain was beset by Storm Angus.

There's one point worth noting here that applies beyond just ScotRail. The most problematic part of our railway system is Network Rail; it is responsible for over half of all delays. But, the only reason train operating companies stand a chance of making a profit is because the most heavily loss making part of the railways has effectively been nationalised in Network Rail.

A tale of two unions

This is a short post to explain why I devoted so much attention to sector balances in the last couple of posts — this one on Scotland's onshore economy, and this one extending it to include the North Sea.

Although sector balances will seem rather remote and abstract to many, they do have important implications for currency which does play a much more tangible role in our everyday lives. And it's not just that we can literally hold bank notes in our hands — it's whether our pay is in the same currency as our debts and savings, and how that affects our confidence in the future and even our outlook on life.

But there's a more fundamental reason to pay attention to how countries balance their economies against each other and one that calls for action that transcends national boundaries.

Imagine two countries that mainly trade with each other but where one is a net exporter and the other a net importer that runs a trade deficit. In time, the exporter, which runs a trade surplus, will build up a stock of the other's currency from the proceeds of selling its exports.

Clearly this trade imbalance cannot be sustained indefinitely otherwise the exporter will end up with all the money and the other none, leading to economic collapse in the importing country. Thankfully, there are a number of ways that rebalancing can occur before the situation gets too extreme.

If the countries have different currencies, the net importer can let its currency devalue which will make their exports cheaper to the other country and that should, in time, reduce the importer's deficit and balance the trade.

Flexibility with currencies helps keep trading economies in balance. But it's important to realise that a country that permits a devaluation is effectively allowing all its citizens to become poorer relative to the rest of the world. The alternative, to ask workers in certain industries to take a cut in their wages to help reduce the price of exports, may be equivalent in theory, but would cause an outcry politically.

But what if both countries use the same currency?

One option is that the exporting country with the surplus lends money to the importing country with the deficit. But this is not sustainable either because the accumulation of the net importer's currency is just replaced by a build up of debt, and the importer will face mounting interest payments which can only make the situation worse. This is essentially what has happened with Germany and southern European countries that use the Euro.

A better solution, if politically feasible, is to balance the economies with fiscal transfers. In other words, set up a common public sector that spans the countries with spending and taxation powers that can redistribute the money to where it's needed. This is the mechanism that currently operates within the UK in tandem with the Sterling monetary union, but which is absent from the EU and its Euro monetary union.

And this brings us to why sector balances and currency are not mere technical details but fundamental in understanding unions of countries.


If the EU does not put in place a surplus recycling mechanism between exporting and importing countries then it's hard to see how the Euro can survive because imbalances of trade will result in long-term, ever-increasing accumulations of debt.

If Scotland leaves the UK then the UK's fiscal recycling mechanism will need to be replaced with a solution involving currencies. As yet, it's not at all clear how this might be done.

Interesting and uncertain times are ahead for both unions. But as Bertrand Russell pointed out, uncertainty is no excuse for inaction: it is important to accept what can be known with some certainty, hold one's beliefs with a certain element of doubt, but still act with vigour.

Unfortunately, reality is somewhat backwards in this regard. What has been researched and established on evidence is often dismissed in the face of untested beliefs that are held with great certainty, and what action there is by government is diluted variously by dithering, timidity and, in the worst cases, ideology. That said, perhaps it is just as well that governmental vigour is kept in check by the electorate.
Posted by mcnalu at 22:00 No comments: