The Fraser of Allander Institute (FAI) published its report on how Brexit might affect Scotland this week.  There were many such assessments for the UK before the EU Referendum, but this is the first that takes a detailed look at Scotland with economic modelling.

Most economists agree that leaving the EU will hurt the UK economy because it will make selling our exports more difficult. There are of course societal issues too. To some people, EU membership is desirable as it brings with it such things as the freedom to move and work in any EU country. But others are concerned that the UK has lost sovereignty — the power to take the final decision in matters affecting its own citizens. And of course some worry that there is too much immigration. But societal and economic considerations are not entirely separate and immigration is one aspect that links them. In fact there's a surprising and important aspect in the FAI's results regarding immigration, which we'll come to later.

Firstly, let's deal with its main finding: as a result of Brexit, in 10 years time Scotland's GDP will be 2% to 5% below what it would have been if we stay in the EU.

Firstly, the statement is concerned with onshore GDP only, mainly because the North Sea bit of it is near impossible to predict over 10 years.

Secondly, this is real GDP, meaning that it is corrected for the effect of inflation (changing prices).

Finally, and I've seen much misunderstanding on this point, it's not saying GDP will be 2-5% lower in 10 years than it is now, nor is it saying the annual growth rate will be 2-5% lower. The statement on GDP, and all other quantities in question (wages, jobs, population), is relative to what it would be if we don't leave the EU.

The impact depends on the type of Brexit: the 2% is soft, Norway-style Brexit and the 5% is hard Brexit where we default to the World Trade Organisation (WTO) rules. At present, hard Brexit looks more likely so I'll stick to the WTO scenario here.


Consider this graph of real GDP. 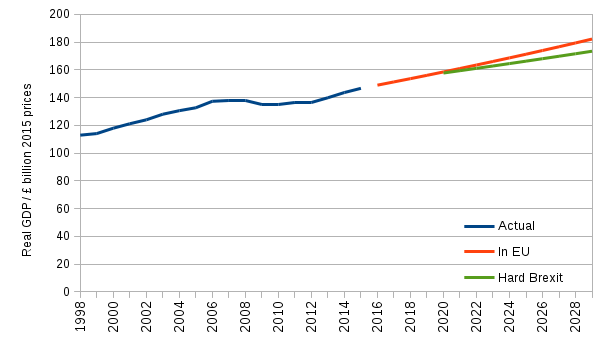 This is not from the FAI report but it illustrates what their 5% reduction in GDP looks like over 10 years. The blue line uses actual figures for real GDP in 2015 prices from the latest Scottish national accounts.

The red line shows what might happen if we stay in the EU and GDP increases with a growth rate of of 1.6% per year — the average from 1998 to 2015 including the recession following the 2008 financial crisis.

Remember this isn't a prediction or a real run of a model — it's a plausible illustration of what the FAI's estimated 5% loss of GDP over 10 year might look like.

The difference doesn't look so dramatic on the graph and you might be tempted to think: oh, Brexit, even hard Brexit doesn't look that bad. Well, there's some truth to that, but to appreciate the impact you need to look beyond just GDP.


You can think of GDP as the sum of all income in the Scottish economy for newly produced goods and services. This isn't quite right due to depreciation and few other wrinkles, but it'll do for our purposes. (See this post if you'd like to know more about GDP.)

Now, if total income grows faster than the population, then people must, on average, be enjoying higher incomes. Of course, these incomes are not distributed equally, which is an important but separate point which you can read about in this post and the ones following it on Scotland's inequalities.

To account for changes in population you need to work with GDP per capita which is just GDP divided by the population. This tells you the average income per person and is related to other measures of individual income. For example, GDP per capita was £27,300 in 2015 whereas the median income before tax according to the Annual Survey of Hours and Earnings was £27,710 in Scotland.

The graph below plots GDP per capita. Each value on this graph is calculated by taking the value for that year from the previous graph and dividing it by Scotland's population. 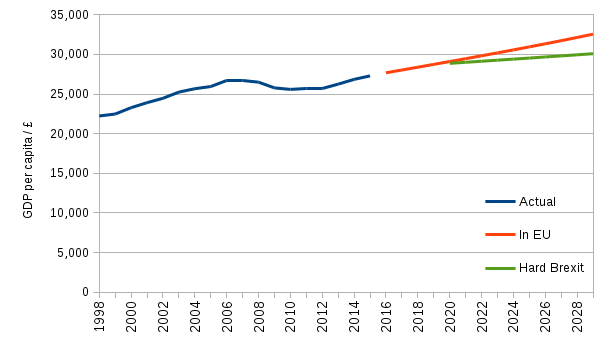 If you compare the two graphs you'll see that the GDP per capita gap in 2029 is larger than the one for GDP; this is due to the more rapid population growth in the Brexit scenario. To put it colloquially, not only is the pie growing more slowly but there are more people wanting a slice of it.


The FAI model finds that Brexit will have a greater impact on the rest of the UK (rUK) than Scotland. This is because Scotland has a lower proportion of direct trade with the EU. According to the latest Scottish national accounts 16% of Scotland's total exports in 2015 went to the EU whereas 44% of all UK exports went to the EU. In fact, given that 64% of Scotland's exports go to rUK, a good part of the Brexit impact on Scotland will be from the slowing rUK economy rather than the impairment of its direct trade with the EU.

And here we come to the explanation of why the FAI's model says that Scotland's population will rise faster in the Brexit scenario. The economy in Scotland will be in better shape than rUK's, including higher real wage growth, and that will cause immigration to increase from rUK into Scotland.

There is a circular irony in the fact that concerns about immigration motivated some people to vote for Brexit and that in turn may actually cause immigration.

All else being equal


The results from the FAI model are subject to the usual qualification of all else being equal or, if you prefer latin, ceteris paribus.

For example, they assume there will be no significant fiscal intervention by the government, such as tax cuts or spending stimuli, nor any impact from new trade deals. Such factors could offset some of the loss of GDP and some proponents of Brexit, though very few economists, argue that it could boost GDP above what it would be if we remained within the EU.

And there are many factors that could make matters worse. One concern is Brexit's effect on labour productivity — the GDP produced per hour worked — which underlies real economic growth. Productivity has failed to grow since the 2008 financial crisis in the UK and there has been speculation that Brexit may result in another impediment to its growth.

There are many other imponderables. The value of the pound against the US dollar and Euro has dropped since the Brexit vote. Although this has the downside of making imports more expensive, it should also boost UK exports which will seem cheaper to foreign customers. It's too soon to conclude anything from the national accounts figures on trade as yet, but by early 2017 figures for 2016Q3 and 2016Q4 will become available.

One interesting point that's addressed in the FAI report is what will happen if the £860 million per year — Scotland's share of the UK's financial contribution to the EU — is redirected to spending into the private sector by the government. The report estimates that by 2029 this will cause Scottish GDP to be higher by 1% or £1.8 billion (although this is estimated separately from the main modelling).

The report doesn't mention it, but a significant implication of this is what might happen if, for whatever reason, the reverse happens and government spending falls. On top of likely cuts to already stressed public services — notably social care, the NHS and councils — a fall in government funding will reduce GDP and real incomes with it.

The FAI's report tells us that Brexit is going to have a significant negative effect on Scotland's economy, but it is by no means catastrophic in itself. Rather, it suggests a dimmer economic future. To my mind, the bigger concern is that it will make it more difficult to weather other economic shocks such as that due to the fall in oil price, or some kind of repeat of the financial crisis of 2008.

But of one thing we can be certain, it's highly unlikely that we'll see the nice straight lines I've sketched numerically in the graphs above.


To a scientist, comparing two future scenarios like this is unsettling because only one of them will play out in reality and, short of an alternate universe, we will never be able to compare it against the other. In other words, we can never know whether the model's results are correct.

But, that's not to say such modelling has no value. For the same reason that a journey is not just about the destination, it's not just the bottom-line results of the model that are of interest but the thinking that goes into it. Elements of that do lead to testable propositions. Here are two we can phrase as questions:
We will have to wait and see.
Posted by mcnalu at 20:25