There's an engineer's saying that goes "Faster. Better. Cheaper. Pick two." In politics you could say "Fiscal deficit, trade deficit, private savings. Improve two." This post takes a look at this for Scotland and offers an alternative perspective on Scotland's fiscal deficit. Data sources are given in the footnotes.

We're using the term 'government' loosely here. Strictly, we should be talking about the public sector, which is all government bodies plus public owned corporations such as Scottish Water along with a population share of UK institutions such as the Bank of England.

So, would it be right to conclude that the private sector balance is about £15 billion?

The answer is no. The reason is that there's another large flow of money out of the private sector (in addition to tax) that means the private sector balance is much less than £15 billion. This flow is caused by trade (which was discussed in this post). Specifically it is the amount spent on imports less what is received from exports, which for 2015-16 amounted to £12 billion.

At this point we need to be precise about our definitions. We've defined three sectors so far:
By balance, we mean the income of the sector less its outgoings for a given year, which for these figures is the 2015-16 financial year. A sector with a positive balance is enjoying a rise in wealth over that year.

If you consider these definitions, you'll notice that we've divided the whole world into three sectors and, so long as we discount the possibility of secret trade with Martians, the balances of the three sectors must add to zero.

So, the balance of Scotland's private sector* must be £15 billion minus £12 billion which is £3 billion.

What we have done here is construct a well known macroeconomic identity. That is, an equation that must be true by definition.

The graph below shows the three balances for the last 18 years in nominal terms (i.e. not corrected for inflation) excluding the North Sea**. 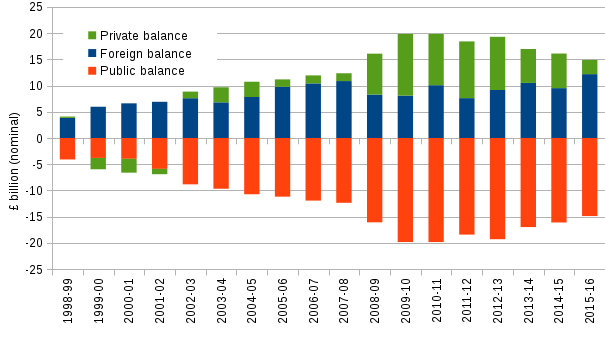 First, notice that the bars are symmetric about zero. This is another way of understanding the identity: the balance of all three sectors must sum to zero, that is:

which, with a little basic algebra, can be stated in terms of the more commonly discussed deficits as follows:

The private balance is often referred to as something like 'net private sector savings' by economists but 'savings' does not have its everyday meaning, and can mean different things to different people. In macroeconomic terms it's best to think of 'savings' as meaning income that is not consumed. Consumption refers to spending on something that has no long term value, for example, buying a packet of crisps or toilet roll represents consumption spending, whereas purchase of a house or shares in a company does not.

Do not read any causation into the way an identity is expressed. The second word equation may tempt you into thinking the fiscal deficit is caused by the trade deficit but no such inference can be made without more information.

However, it is instructive to consider different scenarios. To provide some connection to the present reality let's keep one quantity fixed, change another and see what happens to the third.

First, if there was no trade deficit we would have:

What this is telling us is that if trade were balanced and the private balance remained as it is now then most of the fiscal deficit disappears.

Quite how this might come about is not easy to imagine. The trade deficit can be reduced by increasing our exports or by reducing our imports. If you look in your fridge, wardrobe, driveway, or inspect the device you are reading this on, you will appreciate the problem with the latter. The Scottish Government is very keen on upping exports but has not had much success in recent years. In fact, most developed economies struggle to find ways to improve their trade deficit as it is asking for both the private and foreign sectors to change their behaviour.

Next. consider what would happen if, as suggested by John McLaren, the fiscal deficit is chopped down to £3 billion and the current trade deficit of £12 billion persists:

This cure for the fiscal deficit means that the private balance takes the hit — quite a colossal hit if the trade deficit stays the same — and this is because, as John McLaren outlines, the government raises taxes and/or cuts government spending.

Economic growth does not in itself change the argument (in fact McLaren's scenario assumes £3 billion of tax revenue growth) unless you can explain why exports or tax revenues see superior growth to imports and public spending.

So, although caution is needed in reading cause into such an identity, we can be sure that Scotland's fiscal position cannot be changed without either the closing of the trade deficit or a reduction in wealth for households and businesses, or a bit of both.

—
*Scotland's private sector balance as I've computed it here includes a component which goes to the foreign sector but not through trade. This is because foreign employees work and are paid in Scotland, but also because some private sector assets in Scotland are foreign owned and returns from these are sent abroad. Also, some Scottish residents receive income for working abroad and Scotland receives income for owning assets located abroad. Ideally this net income (denoted by Z in this blog post) would be separated out and added to the foreign balance as is done in computing the UK's current account balance. Unfortunately the Scottish Government doesn't publish this for Scotland. The other consequence of this is that the foreign balance here is just the trade balance. If these issues could be corrected, the foreign balance would be larger and the private balance smaller. This is considered further in the next blog post. EDIT 31/10/2016: Clarified and link to next blog post inserted.

**Data on imports and exports for the North Sea are not available for Scotland, though an experimental estimate was published for 2012 (one of the North Sea industry's best years) by the Scottish Government. To remain consistent I have kept all figures in this post to the onshore values as published by the Scottish Government in the 2016Q1 national accounts (trade deficit) and GERS 2015-16 (fiscal deficit). Due to the fall in the oil price from late 2014 onwards, North Sea revenues have dropped markedly and profits are now near zero and so for 2015-16 there was almost no difference between onshore tax revenue and tax revenue including the North Sea.
EDIT 30/10/2016: The link above to the Scottish Government experimental estimate news item disappeared in the last five days. I don't know why. The report it is based on is still there however.
Posted by mcnalu at 22:38