In some respects equality has improved, with leadership of Scottish political parties being an obvious positive example. Yet in many other aspects of life gender inequality persists, particularly in employment and pay.

The gender pay gap refers to the fact that on average men earn more than women. This graph constructed from ONS data shows the gap for Scotland and the whole UK for full-time and part-time employees. It is for gross earnings, that is those before tax. 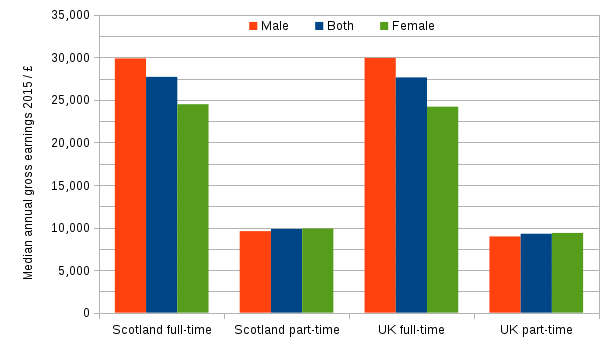 The gap is a little over £5000 and is slightly larger for the UK than for Scotland. The gap for part-time work is interesting because it reverses, in that women earn a little bit more than men.

What's not shown on the graph is that about 60% of full-time jobs are done by men but only about 20% of part-time jobs, with the UK and Scotland differing by only a few percentage points. A possible explanation of the reversal of the gender gap is that more women than men, especially those in better paid jobs, choose to return to work part-time after having a family.

But there's an interesting twist.

The more common measure of average is the mean (so common it is often taken as being synonymous). To calculate the mean, you add up all the earnings and divide by the number of people. The problem with the mean is that a very small number of very high earners can cause the mean to be misleadingly high. For example, the median of 1, 10 and 88 is 10 but the mean is  33 (1+10+88 divided by 3).

The graph below shows the gender gap in medians, calculated from the data in the last graph, and also the gap in means. 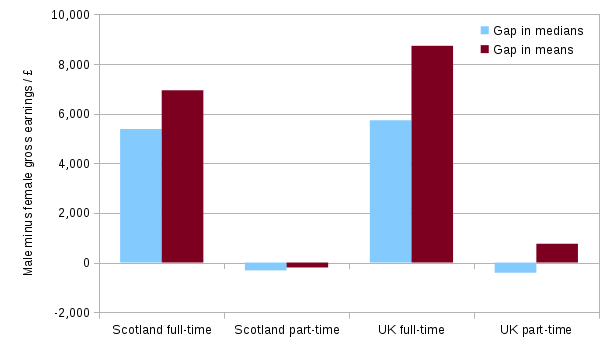 For Scotland, the means tell the same story as the medians: men earn more than women full-time but there's a reversal for part-time. For UK full-time work, the mean also shows a gender pay gap in favour of men. And, here's the twist: there is no reversal of the gender gap for UK part-time work. The mean for men in part-time work in the UK is larger than that for women whereas the medians show the opposite. This suggests that a small number of men in part-time employment have very high earnings. What the data does not offer is an explanation of why. Answers on a postcard please, or in comments.
Posted by mcnalu at 20:55