The fact that there is a budget deficit — public spending exceeds revenue — has been centre-stage in the UK political debate since the 2008 financial crisis. The collapse in the oil price over the last two years has brought Scotland's "notional" deficit into the limelight of politics. This post looks at Scotland's deficit using a graph and some numbers from chapter 5. I know this post is rather number-laden, but I promise to make up for that in subsequent posts...

The graph below shows the total revenue from taxes and other fees raised in Scotland. The amount from North Sea revenue is the geographical share attributed to Scotland, which is about 80% of the UK total. Public spending, or Total Managed Expenditure to be precise, is shown by the line. All figures are adjusted for inflation to be in 2014-15 prices. 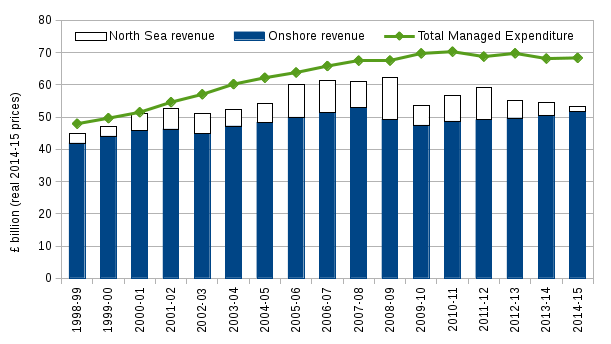 The deficit in 2014-15
Scotland's deficit is its spending of £68.4 billion less its revenues of £53.4 billion which comes to £15 billion (technically this is the net fiscal balance which is not quite the same thing, but the difference is not worth bothering with for our purposes).

Scotland's deficit is in fact notional because it doesn't have to balance its spending against the revenues raised in Scotland. Instead, this balance is done at the UK level and so it is only the UK's overall deficit that has practical implications.
Posted by mcnalu at 21:58