The other day it was announced that Scotland's electricity generation from renewable sources increased by 15% last year. This is in line with the trend of the last fifteen years, which is discussed in Chapter 2 of the book.

On a dreich day in the early 1990s, I stepped off a train at Falls of Cruachan train station just above the banks of Loch Awe. Back then, and perhaps still, it was a summer-only request stop and you had to thumb a train down for it to stop. The start of the trail up to Ben Cruachan was shrouded in bracken which emitted the occasional surprised sheep. It was rather an unpleasant trudge and the atmosphere was close.

But, after climbing a couple of hundred metres, I was astonished when I looked up from the muddy path. For a moment I saw an Aztec temple. I was looking at the impressive dam that holds back the waters of the reservoir that feeds Cruachan power station. To continue my ascent of Ben Cruachan I had to climb a ladder up the wall of the dam. Magic.


When I returned home I mentioned the adventure to my elderly neighbour. "When I was last there I said it'd be a cracking spot for a dam," he said. He reckoned that was back in the early 1950s.

Cruachan doesn't actually generate electricity from scratch. It's a pumped storage station. At times of low demand it uses excess electricity on the grid to pump water up into the reservoir and then, when we're all making cups of tea after watching royals kiss or a penalty shoot-out in the World Cup, Cruachan and other pumped storage stations can collectively zoom from nought to a couple of giga-watts (GW) in a minute or so. 2 GW can boil a million kettles, power many million TVs, or power the flux capacitor in Back to the Future's Delorean for time travel.

In addition to pumped storage, Scotland also has many hydroelectric stations to generate electricity from scratch using water collected in highland reservoirs. The graph below shows that in 2000, a few years after I climbed Cruachan, almost all renewable electricity generation was hydroelectric (pumped storage is not included on this graph). 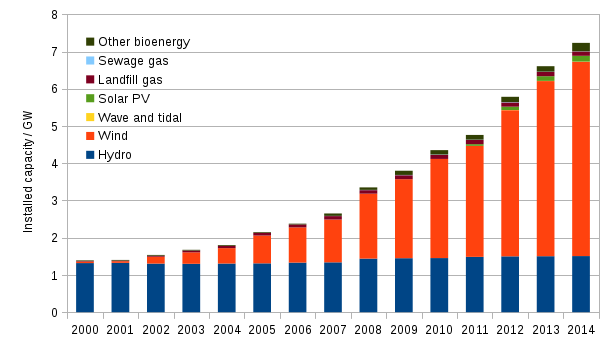 Look what happened at the start of the 21st century. Renewable electricity generation rose exponentially. And I mean literally, in the mathematical sense of the exponent function, not just the figure of speech. The dramatic increase is almost entirely due to wind generation which has risen one-hundred fold over the last fifteen years.

There is of course a debate to be had about whether people want to see more wind turbines on the landscape, and another on how best to secure our electricity supply. I won't get into those issues here, but I do think the turn to renewables is essential in reducing the fossil fuel emissions that cause climate change.

That said, it's important to realise that renewable electricity generation is only one part of the emissions problem, and actually a minor part. Of all our energy use in Scotland, only 21% is electricity, with the rest being dominated by fossil fuel burning: 25% is for transport and the largest is for heat at 54%.
Posted by mcnalu at 13:20