In the last post I looked at a graph of shares of income in Scotland that showed inequality has hardly changed in the last 15 years. To answer the last question I posed at the end of that post, I'll now look at a better way to assess how the distribution of income changes.

Just like the median is the boundary that divides the population into two groups, we can talk of decile boundaries So, rather than look at shares of income of the bottom, middle and top groups as we did in the last post, we can look at the decile boundaries. The upper boundaries for 3 and 7 are shown in the graph below along with the median (decile 5). Incomes are adjusted for inflation to be in real terms in 2013-14 prices as published by the Scottish Government. 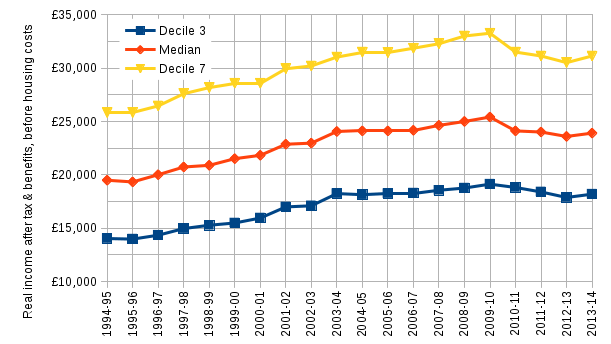 So although higher income groups did experience a larger rise than lower income groups in absolute terms (£5300 against £4200), the lower incomes benefited the most in percentage terms (30% against 21%). So depending on how you choose to measure inequality you can claim that inequality both increased and decreased slightly.

It's worth looking at the effect of the recession since 2008. Incomes peaked in 2009-10 and fell the following year, though the fall for the 3rd decile was the smallest in both absolute and percentage terms. The fall continued in all groups until 2013-14 which shows a slight rise. The fall at the 3rd decile was 5% and 6% at the 7th decile and it's clear from the graph the fall was also greatest in absolute terms for the 7th decile.

The reason that the recession reduced higher incomes the most is because a good proportion of income in the first three deciles is from state benefits and these are not directly affected by the recession, unlike wages from employment.

People on higher incomes tend to save more than those on lower incomes, and those on the lowest incomes are likely to save very little or be in overall debt. As such, a fall in income may have a substantial impact on the standard of living afforded by people in the bottom deciles, whereas it might have no effect on people in upper deciles other than reducing the rate at which they save.

Is it true that we all got richer?

No graph surprised me more than the one above when I was researching material for the book. There are number of reasons why it is surprising.

Our intuition fails in appreciating the effect of slow growth over long time periods. An annual growth rate of 1% may seem fairly modest, but over 20 years this would lead to an increase of almost 22% (1.01 raised to the power 20) and so comparable with what we have just seen in the above graph. In fact, economic growth in GDP has exceeded 1% per year, but not all gains in GDP go to household income and also the number of households has grown too.

The psychology associated with gains and losses is complex. On the one hand, people tend to judge how they are faring against their peers. This means that the steady rise in incomes was probably under-appreciated because almost everyone benefited from it. Also, people tend to feel greater displeasure at a loss than they would feel pleasure from an equal gain. For this reason, and because it was more rapid, the post-2008 income drop was felt more acutely than the overall gain in real incomes over the last twenty years.

Another reason that it's surprising is that popular discourse about inequality often fails to distinguish between inequality in income and wealth and inequality in the latter is much greater, as I'll discuss in a future post. The next post will focus on how we measure poverty and despite what we've found above, there is good reason to believe it has started rising in recent years.
Posted by mcnalu at 07:54