Inequality of income and wealth are often blurred in popular discussion. For example, when you hear someone refer to "the 1%", are they meaning in wealth, or in income? Does it even matter? I'd argue yes for two reasons. The first is demonstrated in the graph below, and I'll explain the other reason at the end.

The Wealth and Assets Survey in Scotland was published in March 2015 and provided data on wealth of households between 2006 and 2012. This data is drawn from the GB-wide Wealth and Asset survey analysed by the Office for National Statistics (ONS).

The graph below shows the household wealth owned by the ten deciles for each two-year period. Each decile represents 10% of the population (about 530,000 people). 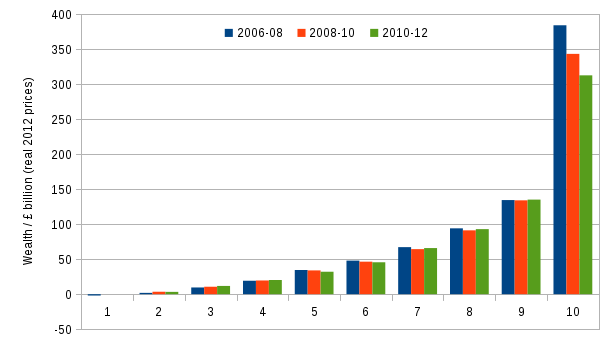 The inequality in wealth is clear: the first decile owns near zero wealth whereas the tenth decile owns just under half of all wealth and two to three times that owned by decile 9. Wealth inequality for the whole of GB shows a similar pattern.

The only decile to experience a significant drop in wealth — a 19% fall — over the six years is decile 10. This is plausible because the richest in society hold much of their wealth as assets such as shares and property and these saw significant falls because of the financial crisis.

The first reason why it is important to distinguish between income and wealth inequality should be clear: inequality is much larger for wealth. And the second reason is involved in the first — tax.

Income, that is money paid in return for some form of work, is taxed progressively, in that the percentage paid as tax increases as income increases. Wealth on the other hand is hardly taxed at all. By my estimates, about 40% of Scotland's revenue comes from income tax and national insurance, whereas no more than 4% comes from taxes on wealth.

Ramping up income tax on the top 1% of high earners could reduce income inequality, but it'd have next to no impact on wealth inequality because the top 1% for wealth can, quite legally, benefit from returns on their wealth outside the income tax system. Part of the reason for this is because the very wealthy can optimise their tax across countries, but it's also because the wealthy do not receive most of their income from doing work, but as returns on existing wealth. For this reason Thomas Piketty and others have proposed a wealth tax at the EU or global level at seemingly modest rates of 1% to 3% per year.

A side effect of taxing wealth in this way is that we'd have much better data on it. Wealth data is much more uncertain than that for income, especially for the most wealthy,  and part of the reason for this is that countries need to monitor income to check taxes and decide who should receive benefits.

The implication of this lack of knowledge on wealth is that graphs like the one above underestimate wealth inequality. There's one way to confirm the problem: every debt is someone else's asset, and so at the global level the two must equal. If we add up all known debts in the world, it exceeds corresponding world-wide wealth; a conundrum that Piketty refers to as the Earth being in debt to Mars. These rich Martians are likely to have stashed their wealth in tax havens.

The next post will be the last in this week's series on inequality in Scotland, and it will look at debt which, if you squint carefully at the graph above, is just visible for the first decile.
Posted by mcnalu at 08:49