The theme of the current series of posts is inequality. In the last one I looked at gender inequality and in this one I'll look at inequality in shares of income.

Mention inequality and many people immediately think of the wealthiest 1%. There are good reasons for focusing on the very wealthy as with such wealth comes power to influence or subvert democratic institutions. However, there are less noble reasons for zooming in on extremes of wealth (and poverty) — it makes for better headlines and dramatic statements.

I'd like to take a different approach and look at the majority of the population rather than exceptional minorities. Let's divide the population into three broad groups by income: the bottom 30% (deciles 1-3), the middle 40% (deciles 4-7) and the top 30% (deciles 8-10). Incomes are after tax is deducted and benefits are added.

The graph below uses data from the Scottish Government and shows the shares of income going to each group in Scotland. 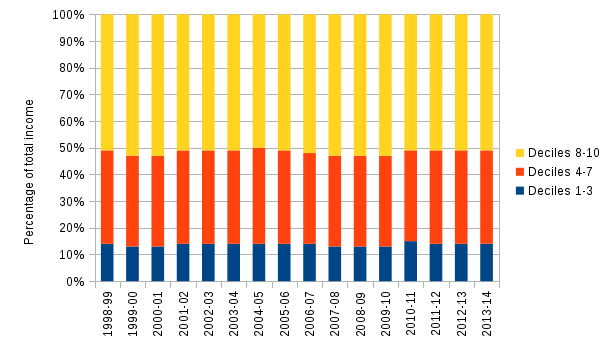 The most striking feature of this graph is that the shares of income have hardly changed over fifteen years and this is despite the changes in governments in both the UK and Scotland. There is an increase in inequality leading up to the 2008 financial crisis, and then a reduction in 2010-11, but only by a few percentage points. It turns out that this kind of measure of inequality is quite insensitive to changes, and that this can be shown mathematically.

On the up side, this lack of variation means we can summarise the last fifteen years succinctly: the richest 30% in terms of income received just over 50% of all income and the poorest 30% received 15%, and so 35% of total income went to the middle 40%.

There are a number of questions we can ask about this income inequality:
In upcoming posts I'll provide some answers to these questions, except the first one. That question is a moral and inescapably subjective one. Nevertheless, society must answer it and, in a sense, you can view our current tax and benefits system as the existing answer. But is it one you agree with?
Posted by mcnalu at 22:31