If there is one thing no politician should ever do, it is to allow the poor to become poorer. The graph in the last post showed that people of all incomes have experienced real terms rises over the last twenty years. In this post I'll look at standard measures of poverty and how they tell a slightly different story.

There are two main measures used to track poverty in Scotland and throughout the UK and both are based on income. One is called relative poverty and the other is absolute poverty.  In both cases, an individual is deemed to be in poverty if their household income is below a certain amount, often referred to as the threshold.

The relative poverty threshold is set relative to the rest of the population that year, and so it can change every year. In contrast, absolute poverty is defined using a threshold that does not change each year, but is revised every five years or so.

It may help to draw an analogy. Imagine ten competitors in a race on a running track. You could define a slow runner as one who finishes in eighth, ninth or tenth place. This is like relative poverty. However, you could instead define it as being anyone who took longer than the time taken by the person who came seventh in last year's race. This is like absolute poverty.

The precise definitions are as follows.

An individual is living in relative poverty if they live in a household with an income of less that 60% of the median income for that year. An individual is classed as being in absolute poverty if their household has an income less than 60% of the inflation-adjusted median for 2010-11. Both measures are stated before and after housing costs — BHC and AHC — and after taxes are deducted and benefits are added. (The incomes are adjusted by a process called equivalisation to reflect different compositions of household.)

Poverty rates are usually stated as a percentage of the population that are below the relevant threshold. This graph uses data from the Scottish Government to show how these poverty rates have changed over the last twenty years. 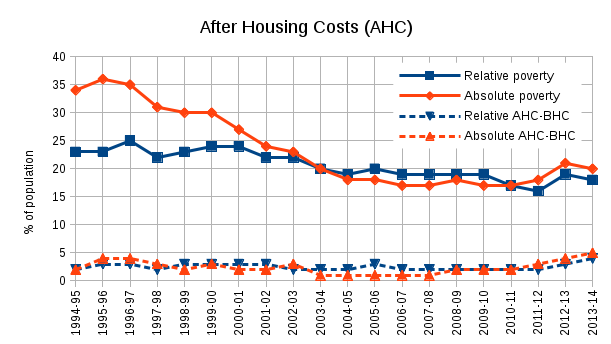 The absolute poverty percentage halves in the first ten years. This is telling us people were moving out of poverty because incomes increased faster than inflation.

Relative poverty shows a more gradual drop over the two decades, which tells us that people on lower incomes were moving closer to the median, which suggests income inequality reduced slightly. This is consistent with what we saw with the decile boundaries in the last post.

The dashed lines show the AHC poverty rate less the BHC one. AHC poverty is consistently one to five percentage points (pp) higher than BHC poverty. The gap for absolute poverty was only 1pp for most of the 2000s, but has widened since 2011-12 to reach 5pp in 2013-14. This tells us that housing costs have become a more significant factor for poverty in recent years.

So, in summary, poverty rates reduced until 2006-07, remained constant for several years but have increased slightly in recent years due to housing costs.

There are several aspects of these measures that I find unsatisfactory, but the most troubling one is that absolute poverty is a misnomer; it's just a variant of relative poverty that accounts for inflation.

The United Nations have their own definition of absolute poverty:


A condition characterised by severe deprivation of basic human needs, including food, safe drinking water, sanitation facilities, health, shelter, education and information. It depends not only on income but also on access to services.

This doesn't involve numbers and, unlike the definitions above, refers to vital services such as education, health and provision of clean drinking water. These services are available to everyone in Scotland irrespective of income and this kind of poverty is all but consigned to history. Sadly, this is not true true for the whole world.

There is a threshold of $1.90 per day that is often associated with the UN definition and people with incomes below it are often said to be in extreme poverty (there's also an unrelated Scottish definition of the same name). The good news is that extreme poverty is declining worldwide. I recommend watching Don't Panic by Hans Rosling of Gapminder if you'd like to know more.

In the next post I'll compare levels of income and poverty in Scotland with other countries and regions of the UK.