This is the last in this series of posts on inequality. I've left debt to last not because it's not important, but because it is a tricky topic shrouded by a fog of misconceptions.

"Is sugar bad you for you?" I asked my Dad when I was a small boy.
"No. Too much sugar is bad for you."
"And carrots are good for you?"
"Not if you eat too many of them."

So I was getting a premature lesson in semantics, but the relevance is that a similar point can be made about debt and wealth. Debt isn't necessarily bad: a loan can fund a new business, and a mortgage can allow a family to fund a good home. It's too much debt (and wealth) held unproductively that creates a problem.

First, it's useful to understand the four different types of wealth. In order of decreasing share of total wealth, they are:
Notice that financial wealth and property wealth are defined as assets less debts. If debts are larger than assets then there will be an overall net debt. For a property where the mortgage is larger than its value this is often called negative equity.

Data in this post is taken from the Wealth and Assets Survey in Scotland which provides figures on all four types of wealth. Financial wealth shows the greatest inequality, as can be seen in this graph which plots household wealth held by each decile (see this post for a quick introduction to the idea of deciles). 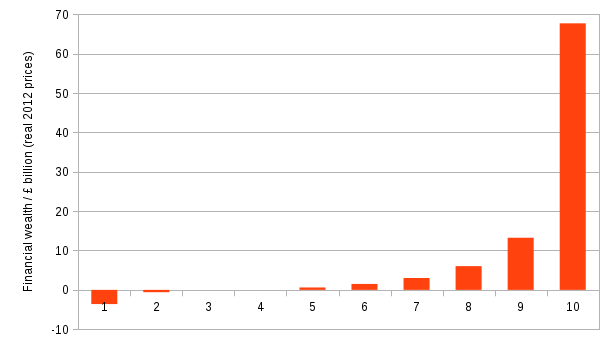 The first and second deciles have negative financial wealth — debts exceed assets. The net debt of the first decile is £3.3 billion, which equates to about £6200 per individual in that decile, and is similar to the net wealth of the seventh decile.

Remember that the graph shows net financial wealth, so even though the values are positive for the higher deciles this does not mean households in the upper deciles do not hold any debt. In fact, they have more debt than the lower deciles. The Wealth and Assets survey states that the median amount (half had less, half had more) of non-mortgage debt outstanding for all Scotland's households is £3500, whereas it is only £1200 for the least wealthy 30%. Although this may seem surprising at first sight, there's a ready explanation: those with more wealth are able to borrow more.

This graph shows the median amounts of outstanding non-mortgage debt for the least wealthy 30% of households. 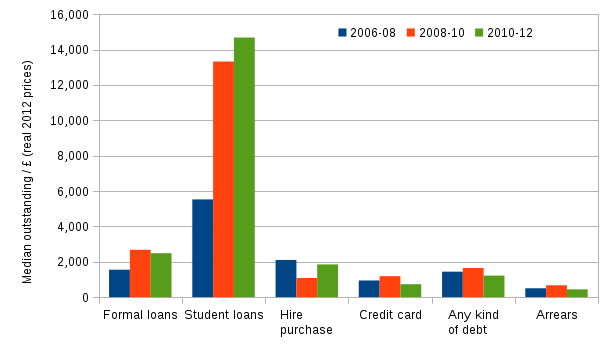 The student loans example provides a striking illustration of the fact that one person's debt is another's asset. When you realise that debt and wealth are two sides of the same coin, then some realities of the economy, money and society become clearer. Specifically, if there exists bad debt then there will exist an equal amount of bad wealth. If you look back to the graph in the previous post, the pronounced fall in wealth in the tenth decile can be thought of as bad wealth disappearing.

A bad debt is one which cannot be paid back. The years leading up to 2008 saw a rapid increase of private debt which ended in crisis when it suddenly became clear how much of it was bad, particularly mortgages. Governments bailed out banks and private debt was effectively transformed into public debt, but that was not enough to avert a recession. And because the fundamental issues that gave rise to so much bad debt were not resolved, the recovery was, and still is very weak.

The build up of private debt prior to 2008 did lead some non-mainstream economists, notably Steve Keen, to warn that a financial crisis was looming. If his reasoning is correct  — and there are still many economists unconvinced, and politicians uninterested — then we can expect the rapid rises in private debt in a few countries to cause crises in coming years, namely, China/Hong Kong, Australia, Sweden, Korea, Canada, and Norway.

As I'm a scientist by training, I welcome theories that make clear, testable predictions and so I'll watch what happens in these countries with interest. As I'm also a human being who does not like to see economic collapse and the misery it can bring, I'm hoping that governments will weigh the evidence and act accordingly.
Posted by mcnalu at 22:03