Inequality across the UK

During the referendum campaign in 2014, I remember being told by folk arguing for independence that Scotland's problems of poverty and income inequality couldn't be fixed from inside the UK. Then in the general election of 2015, and in the current campaigning for the 2016 Holyrood elections, I've heard pro-union politicians directing blame for failure to act on these issues at the current Scottish Government. In writing the book, I was keen to learn who was closer to the truth, but what I found was a complete surprise.

The graph below shows data from the Institute of Fiscal Studies on absolute poverty rates after housing costs (see previous post on poverty) for all UK countries and regions. 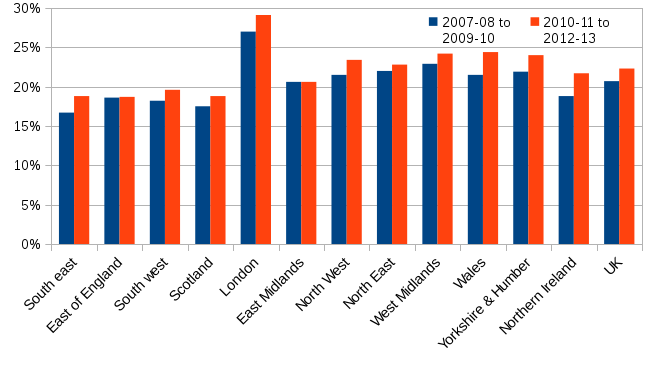 Scotland has the joint lowest poverty rate along with the South East and East of England. Notice that London has by far the highest poverty rate of any region — this is mostly due to its high cost of housing. As we saw in the last post, Scotland's poverty has risen in recent years and we can now see that this is true for most of the UK.

Next, let's take a look at incomes using data from the Office of National Statistics UK Labour Market bulletins. Unlike other data in this series of posts, these are incomes from employment (i.e. benefits aren't included) before tax is deducted. This means we can compare values within this graph, but not with graphs in previous posts. 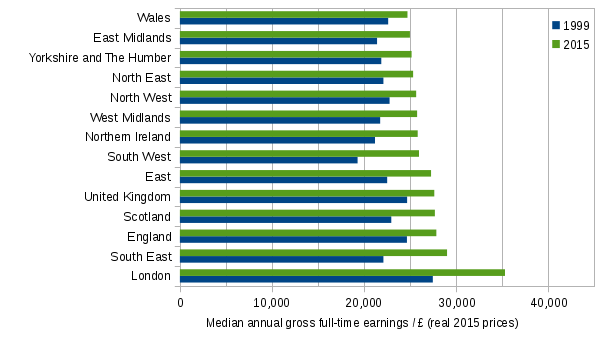 Scotland's median income is similar to England's and ranks as one of the highest, only exceeded by the South East's and London's. Also, Scotland's rise in real terms in the last two decades, which was also seen in a previous graph, is significantly larger than England's or the whole UK's.

Critics of the UK that suggest Scotland is kept poorer by being part of it, and also those critical of the current Scottish Government's stewardship of the country, may want to revise some of their rhetoric. Then again, who am I to suggest that facts should get in the way of a good political fight?

EDIT 14/4/16: This post's aim was simple enough: use numbers to place Scotland's income and poverty situation in a UK context. But, as mentioned in the last post, I think it's important to consider aspects that cannot be measured with numbers, and look beyond any one country. Just after I hit publish on this post, I noticed that UNICEF have done just that — their report puts the UK situation in a wider context.