GDP is mentioned regularly in the media and in political discussion, but it's very rare that I've heard a good, accessible description of it. For this reason I spent quite a bit of time honing an explanation of it in chapter 6 of the book. This post gives a more concise version.

Gross Domestic Product (GDP) is the most commonly discussed measurement of economic activity. It is the total of all value created in an economy.

A business, whether it is sole-trader or a large multi-national manufacturer, creates and adds value. Consider a furniture business that takes wood and turns it into tables and chairs. It buys bits of a wood, does work on shaping and joining them and sells the finished product. The difference between the cost of the wood and the final sale price is a measure of the value added by the business.

If you add up the value created by all businesses, then that total is the Gross Domestic Product. This is called the production approach to estimating GDP. It also helps explain GDP's name:
The official GDP of Scotland in 2014 was £140 billion. (This excludes North Sea industry, which I'll come back to later.) In other words, all economic activity in Scotland resulted in £140 billion of value being created in making physical products, like tables and chairs, or delivering services, such as legal advice or IT support. 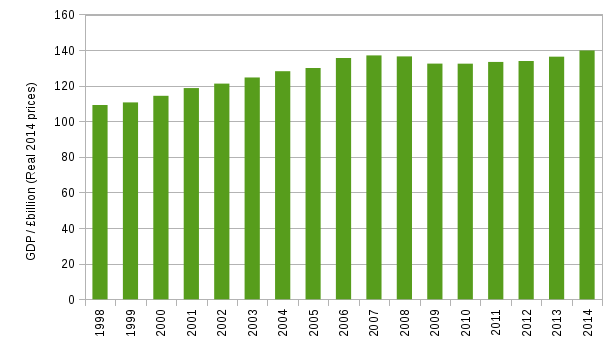 From 1998 to 2007, GDP grew steadily, but following the financial crisis of 2008 it fell and has since recovered. If this pattern seems vaguely familiar, it might be because the graph of real incomes in an earlier post shows a similar time profile. This is not a coincidence. If GDP grows faster than the population then some of the extra value added in the economy can go towards raising people's incomes.

And that leads to an interesting point: one person's spending is another's income. In fact, an alternative way to define GDP, and to compute it, is the income approach. In this you look at the income of individuals from doing work (i.e. labour), the income of businesses (akin to profits) and the income of government (tax). If you add all of these up you will also get an estimate of GDP.

But a GDP of £140 billion for the country is still a remote and abstract figure. To bring home its meaning, we can divide it by the population to obtain the GDP per person (also called per capita) which is £26,100. I won't dive into further detail of it here, but it's again no coincidence that this figure is roughly comparable with household incomes and employee earnings.

In the next post I'll take a look at Scotland's GDP with North Sea activity included and discuss growth rates.