The D in GDP stands for domestic and it refers to the fact that it only includes economic activity located inside the country of interest. According to the EU's standards on national accounts — called ESA10 — this means that North Sea oil and gas activity should be placed in a region of its own outside any of the UK's individual countries. This is why Scotland's "official" GDP includes only onshore economic activity and excludes that taking place in the North Sea.

However, for some purposes it is of interest to include the North Sea in Scotland's total GDP, most obviously to consider how Scotland's economy might look if it were separate from the UK. The most common way to assign a share of North Sea GDP to Scotland is on a geographical basis according to the number and size of oil and gas fields that are under the sea bed off the coast of Scotland. This varies depending on how active various fields are in a given year. In 2014-15, the geographic share assigned to Scotland was 80% whereas Scotland's population as a fraction of the UK was 8.3%.

This graph shows Scotland's geographic North Sea share in addition to Scotland's onshore GDP. The data is taken from the 2015Q3 edition of Scotland's national accounts that was published in February 2016. 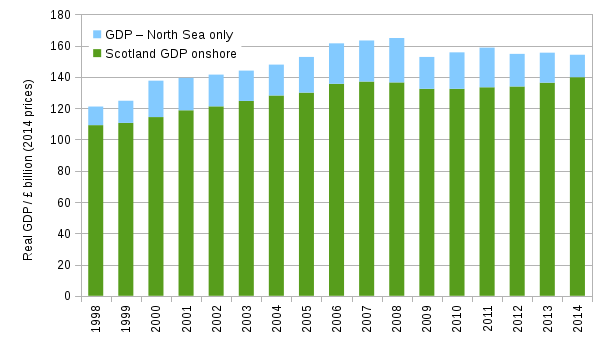 The graph below shows growth rates with and without the North Sea, along with the UK growth rate for GDP (which includes all North Sea GDP). 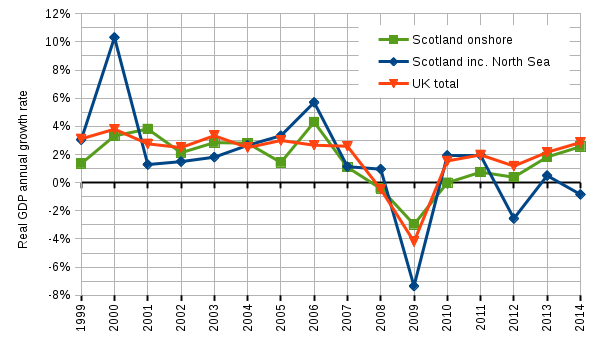 The most striking feature is that the line for Scotland including the North Sea has large spikes, with growth exceeding 10% in 2000 and falling to below -7% in 2009 (part of this is due to the recession of course). This volatility of North Sea GDP is caused by the oil price. Its effect on UK GDP is barely noticeable because North Sea GDP is a much smaller fraction of its total (1% for the UK compared to about 10% for Scotland).

All growth rates clearly show the recession following the 2008 financial crisis. A recession is defined as a period in which two or more consecutive quarters (3 month periods) show negative growth. It's common to say that the economy contracted or shrank because GDP falls in a recession.

Scotland's onshore growth appears to be more variable than that of the UK. This may be because North Sea economic activity has an influence on onshore activity, or because the much larger size of the UK's economy reduces the relative size of statistical fluctuations in GDP.

Scotland's growth including the North Sea shows a very different picture post-2009, with GDP shrinking in 2012 and 2014 and barely growing at all in 2013. If this was official GDP then Scotland would've been in recession for much of 2012-2014.

The quarterly accounts for the end of 2015 are not out as yet, but the first figures for GDP in 2015 show that Scotland's onshore growth for 2015 is likely to be smaller than for 2014, and smaller also than the whole UK's growth in 2015. In fact, in the third quarter of 2015 growth was -0.1%, meaning that Scotland's economy shrank. It's likely that the slow down of the North Sea industry is now hindering the onshore economy via its effect on businesses such as technical consultancies and hotels and restaurants in Aberdeen.

As the North Sea example shows, it's unwise to consider one part of an economy in isolation. So to understand Scotland's economy you need to consider how it's linked to the UK, the EU and the rest of the world. The next post will look at Scotland's imports and exports.
Posted by mcnalu at 08:29