Economies of different countries are connected by trade. A country aiming for complete economic independence, such as North Korea, is called an autarky and is moving very much against the tide of globalisation. As we'll see below, Scotland's economy is deeply connected via trade to other countries.

Importing gives a country access to goods and services it cannot produce itself, or perhaps at lower prices than domestic costs allow. Too much importing may harm a country's businesses however, especially if they struggle to compete on price.

Exporting gives a country access to a larger pool of customers. A rise in exports is generally viewed as a good thing for an economy as it can encourage growth of the country's GDP. But again, too much exporting can have a downside in that it may disrupt the economies of the importing countries, and the exporting country will be vulnerable to any disruptions in those economies.

This graph shows imports and exports as a fraction of onshore GDP from the 2015Q3 edition of Scotland's national accounts. Exports are shown as positive numbers and imports as negatives. This reflects the fact that exports involve a flow of money into Scotland, and imports are a flow out.

Overall, because most trade is with the rest of the UK, Scotland is a net importer. This can most easily be seen in that Net Trade (total exports plus imports) is negative in every year.

More detail on exports are given in the Export Statistics Scotland report 2014 that was published in January 2016 by the Scottish Government. Its figures are calculated on a slightly different basis from those in the national accounts and as such are generally larger, though they show similar trends over time.

This table shows the breakdown of Scottish exports by destination in 2014. 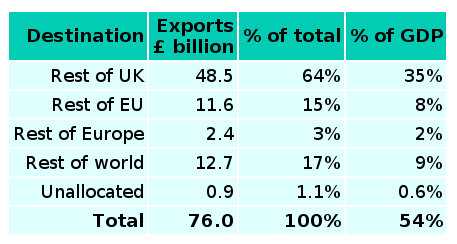 Most exports — almost two-thirds — are to the rest of the UK. Most of the remainder is split equally between Europe and the rest of the world. And just over half of Scotland's economy, some 54% of GDP, depends on goods and services from Scotland being bought by customers in other countries.

The exchange rates of currencies affect trade. For example, if the pound went from €1.20 to €1.80 then goods sold from the UK would become 50% more expensive to countries using the euro. This may increase export income in the short term but in time importers can switch to cheaper non-UK suppliers, reducing exports which will hinder the UK economy.

The essential point in all of this is that the economy and currencies of countries engaged in trade are mutually dependent. The larger economies will be able to wield more power and exert more control over their currency, especially if they are net exporters. This is currently the case with Germany in Europe and has become a problem in the wake of the 2008 financial crisis because there is monetary union but no political or fiscal (tax and spend) union. If the euro (and EU) survives then such problems could be eased by strengthening democratic control of the EU so that less power is held by the wealthiest countries.