There is a new dimension to the political debate ahead of the 2016 Scottish Parliament election — tax. In this post I draw on material from Chapter 5 of the book to explain the changes in devolved tax and spending powers.

A summary of how much of public revenue and expenditure is devolved is shown below. The precise figures shown here are specific to the year 2013-14 and although they will vary from year to year the changes are likely to be no more than a few percentage points. 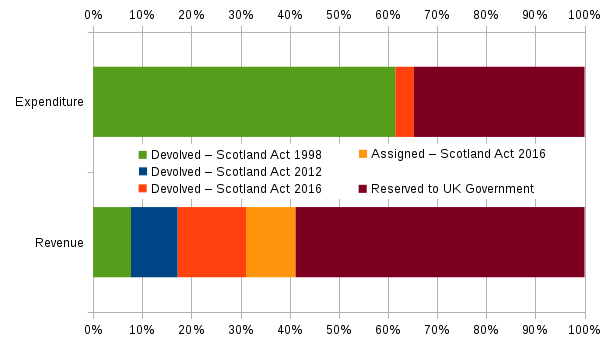 Revenue raising powers covered less than 10% initially, but under the Scotland Act 2016 this rises to over 40%. I'll focus on the income tax powers here because they make up most of the devolved total and have provoked the most political debate.

The main power in the Scotland Act 1998 was to raise or lower the income tax rate by up to 3p in the pound (or 3 percentage points) from the UK rate. This power was never used.

The Scotland Act 2012 went further and introduced the Scottish Rate of Income Tax (SRIT) which came into effect as of today, 1 April 2016. In this, the rate of income tax is reduced by 10p (or 10 percentage points) in Scotland, and the Scottish Parliament is tasked with setting its own rate to replace it. Any decision to change it would affect all other rates by the same amount , e.g. an increase to 11p would bump the 40p rate up to 41p. The decision for 2016-17 was to set it at 10p to match existing rates in the rest of the UK.

The Scotland Act 2016 gave the Scottish Parliament control over all rates and thresholds for income tax (making SRIT obsolete), although it cannot reduce the personal allowance below which an individual pays no tax. The Scotland Act 2016 also assigned the first 10 percentage points of VAT raised in Scotland as Scottish revenue. With the VAT rate at 20%, this represents half of all VAT raised in Scotland. The word 'assigned' is used here rather than 'devolved' because European Union rules prevent VAT rates from varying within a member state such as the UK.

These new powers will give the Scottish Government access to more fiscal levers. The fiscal lever is a dubious analogy for decision-making on tax and spending. For example, there is a lever which controls the basic rate of tax, and currently it's set at the 20% notch (or at the +10% SRIT notch to be strictly accurate).

The reason I use the word "dubious" is that the analogy suggests we know what moving a particular lever will do. I like to think of an old-fashioned signal box in which you can pull a lever to change points on a railway track and raise a signal instructing a train to stop. But any economist will tell you that fiscal levers are not like that.

Pulling a fiscal lever may have the desired effect, or it may do nothing or it may do the opposite of what's expected. Take the proposal to raise the additional tax rate of 45% on earnings above £150,000 to 50%. This may well raise some revenue, but wealthy people and their talented accountants may find ways to avoid it, possibly by moving out of Scotland. So it's hard to say how much revenue would be raised.

For such reasons, politicians tend to be wary of moving fiscal levers especially when there are other targets they've set themselves, and even more so if a tax rise is needed and an election looms. A confident yank at a lever may have unforeseen consequences that might upset voters and the economy.

So am I saying that these weird levers are of no use and we should be content to trundle along voting for parties who suggest only slightly different ways of fondling fiscal lever handles?

Not at all. I think politicians should be bold with them when society's needs require it. Consider the embryonic welfare state in 1911 for which a small but innovative fiscal lever called national insurance was invented. In 1948 it was much upgraded so as to expand welfare provision and create the NHS, and at a time when public sector debt levels as a percentage of GDP were much higher than at present.

And to return to devolution, the key point is to consider which levels of government should control different fiscal levers. For income, there are good arguments for them operating at the country level, and perhaps even at the council level too, though there is the tricky issue of not exacerbating regional inequalities. For wealth, which shows much greater inequality overall, mainly because it is negligibly taxed in comparison to income, this needs co-ordination at the European level or even globally. If you'd like to see a thorough, evidenced-based argument for this, then I recommend reading Thomas Piketty's book Capital in the Twenty-first Century.
Posted by mcnalu at 19:39