I try to make these posts relevant to something I've seen in the news in the last few days, but it's been rather quiet this weekend. Perhaps all the politicians are too busy with their great responses on the doorsteps.

The graph below shows the average daily prison population. It is calculated by adding up the number of people in prison on each day of a year and dividing by the number of days in the year. The data stops in 2011-12. I re-checked the source spreadsheet and found it was updated on 31 March 2016, but it still doesn't contain newer data. I'm not sure why this is. 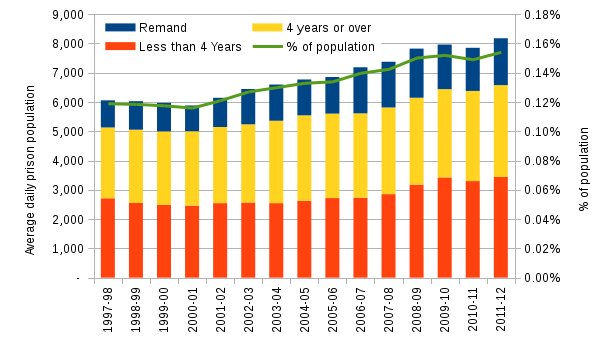 Look first at the columns — these use the scale on the left. The prison population rose from 6100 to 8200 or 35% over these years. Most have a sentence of less than 4 years, with a slightly smaller number being in prison for 4 years or more (including life prisoners and those recalled to custody). A smaller number of prisoners are on remand, that is, in custody awaiting court proceedings.

In contrast to the rise in prison population, the number of crimes recorded by police in Scotland has been falling quite dramatically. From 2005-06 to 2011-12, it fell by 25%. and to 2014-15 by 39%.  This trend is not unique to Scotland, but is seen across the UK, and in many other developed countries. No one is sure what the explanation for it is, but one theory that's got my attention, though I'm not yet convinced by it, is the removal of lead in petrol.
Posted by mcnalu at 17:17