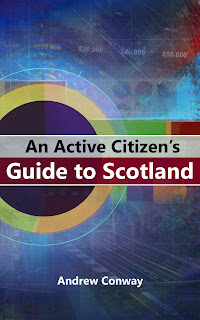 But facts are chiels that winna ding,
An' downa be disputed.
—  From A Dream by Robert Burns, 1786.

Have you felt frustrated when politicians and pundits juggle facts and figures leaving you baffled by a mess of complexity and opinion? Have you felt aggrieved when during a debate in the media — either traditional or social — opponents make contradictory claims on a point and you wish you could be sure who was correct, or at least closest to the truth? Or do you suspect a particular party — one you oppose, or perhaps one you favour — of cherry picking information or distorting the numbers?

My aim with this book is to share an understanding of the information and data that should underpin the political debate in Scotland. If you just want some facts and figures then you'll find them within, but the intention is not just to list statistics about Scotland; it is to highlight sources, dismantle barriers of jargon and place information in context. In short, to assist anyone who wants to improve their knowledge of our society.

A single voice can carry far in the right circumstances.  You can choose to be passive and just nod or shout at the TV, or you can choose to become active. The most common forms of activity are to join with others in a political party or a one-off protest rally or, at the very least, just to feed the ballot box on election day every few years.

It is a fact that many people do not engage in any of these ways. At the last election for the Scottish parliament in 2011, 50% of people who could vote, did not. Although Scotland was widely touted as being much more politically engaged following the 85% turnout in the 2014 referendum, the Scottish turnout of 71% in the 2015 election wasn't that much higher than the UK-wide 66% turnout. Non-voters are so common— roughly one in three adults — that you've almost certainly heard their reasons for yourself: it doesn't matter who's in power; the parties are all the same; my vote won't make a difference; the system is too flawed; and perhaps the most common, and unsaid: people are too busy just getting on with their lives.

But there is another form of engagement, and one which doesn't require you to align with a political party or even vote: improve your understanding of the society in which you live. Learn to question which facts are known with some certainty, and to recognise where uncertainty lies. Learn to separate what is a technical issue, for example how tax is calculated, from what is a moral and political issue, such as why higher incomes are taxed at a higher rate.

At the very least you'll gain a satisfying insight into your society. Even if you still choose not to be politically active you will very likely feel the need to share your insights with others. Whether you do so directly with friends or family, on twitter or facebook, at public debates or with your MP, MSP, MEP or councillors, you can make a difference. Anyone who is is honest about advertising knows that the best way to spread a message is not a TV advert in Coronation Street, nor on a fancy billboard at the busiest road junction, but by word of mouth. And these days, word of mouth is greatly augmented by word of type across the internet.

But, word of mouth's (and type's) problem is that it can spread falsehoods as efficiently as truths. If you want to insulate yourself from the falsehoods and help stem their flow, then the first pre-requisite is that you know how to check facts, and as time is valuable, it's important to be able to do so efficiently. With smart phones and tablets and ubiquitous internet access this has never been easier.

Politics is society's attempt to make sense of a jumbled nest of moral and factual issues and as such is a tremendously difficult business. The aim of this book is to help you untangle and identify some of the certain and uncertain facts. What you then do with them is entirely up to you.
Posted by mcnalu at 12:05